Yesterday I decided to head back to the Pevensey Levels in the slim hope of getting a photo of the Brown Hawker. Possibly the most difficult of the common dragonfly species to get pictures of. On arrival the sun was actually shining and I walked the half mile or so to the area where only a week ago I saw several Brown Hawkers flying. On the way I came across a mating pair of Common Darter which were in the long grass by the path. 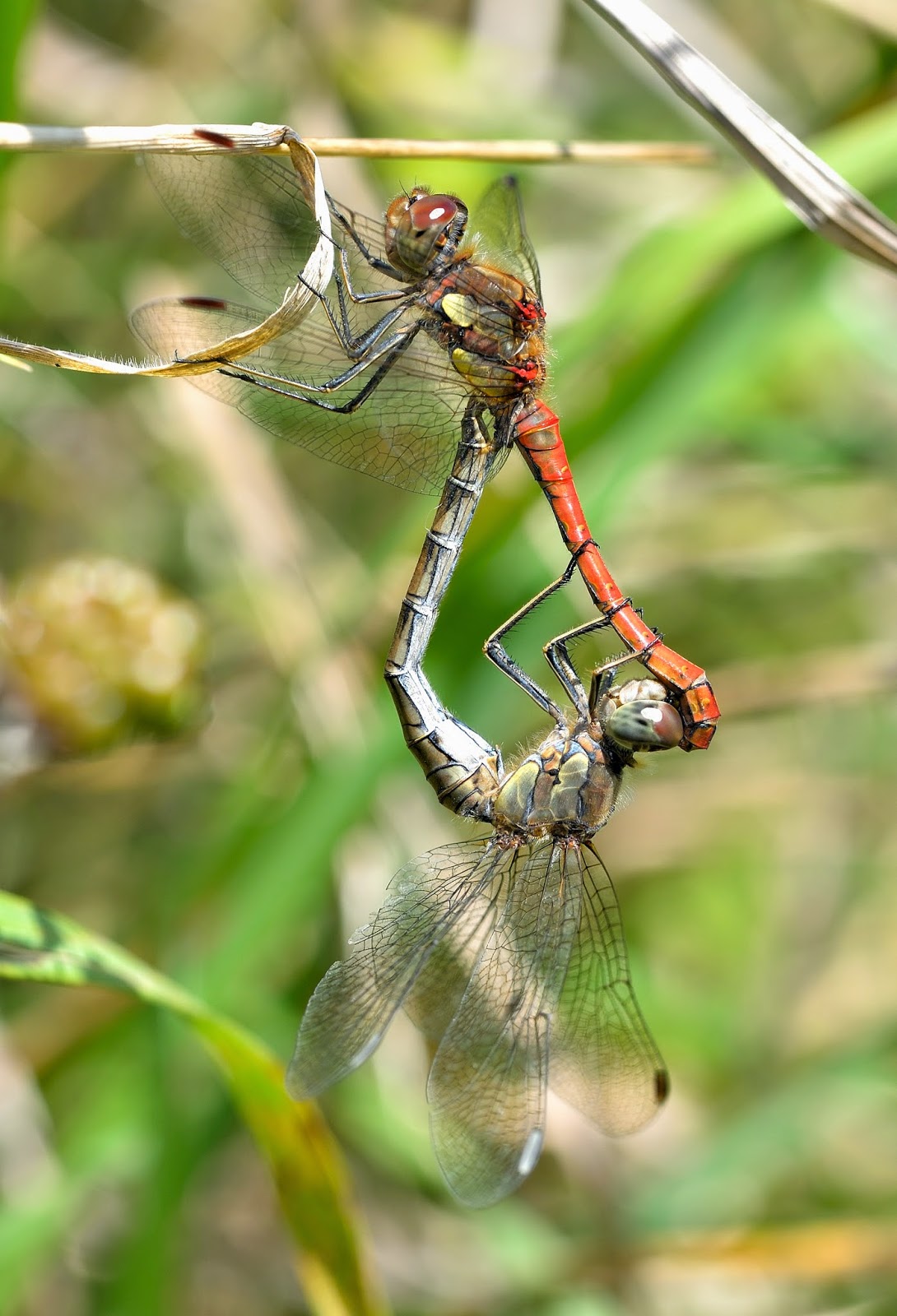 By the time I reached the area where I was hopeful of seeing the Hawkers I hadn't seen any and the sun was now hiding on and off behind some dark clouds. A large Buzzard and a pair of  Sparrowhawks flying over me gave a little interest but on the dragonfly front I was only seeing a few more Common Darter and Migrant Hawkers. After an hour I was beginning to think I may as well go home and do some gardening, but I decided to just have one more look along a track which has bushes both sides of it and is often an area that hunting dragonflies like. Here I was watching a Migrant Hawker and hoping it would settle when it was joined by a very smart female Southern Hawker. This settled near me just as a very large dark cloud went over the sun. It was then a long wait for the light to improve and hoping that the dragonfly wouldn't move off as soon as that happened. Fortunately it didn't and it gave me some of the best opportunities I've had to date for photographing dragonflies. 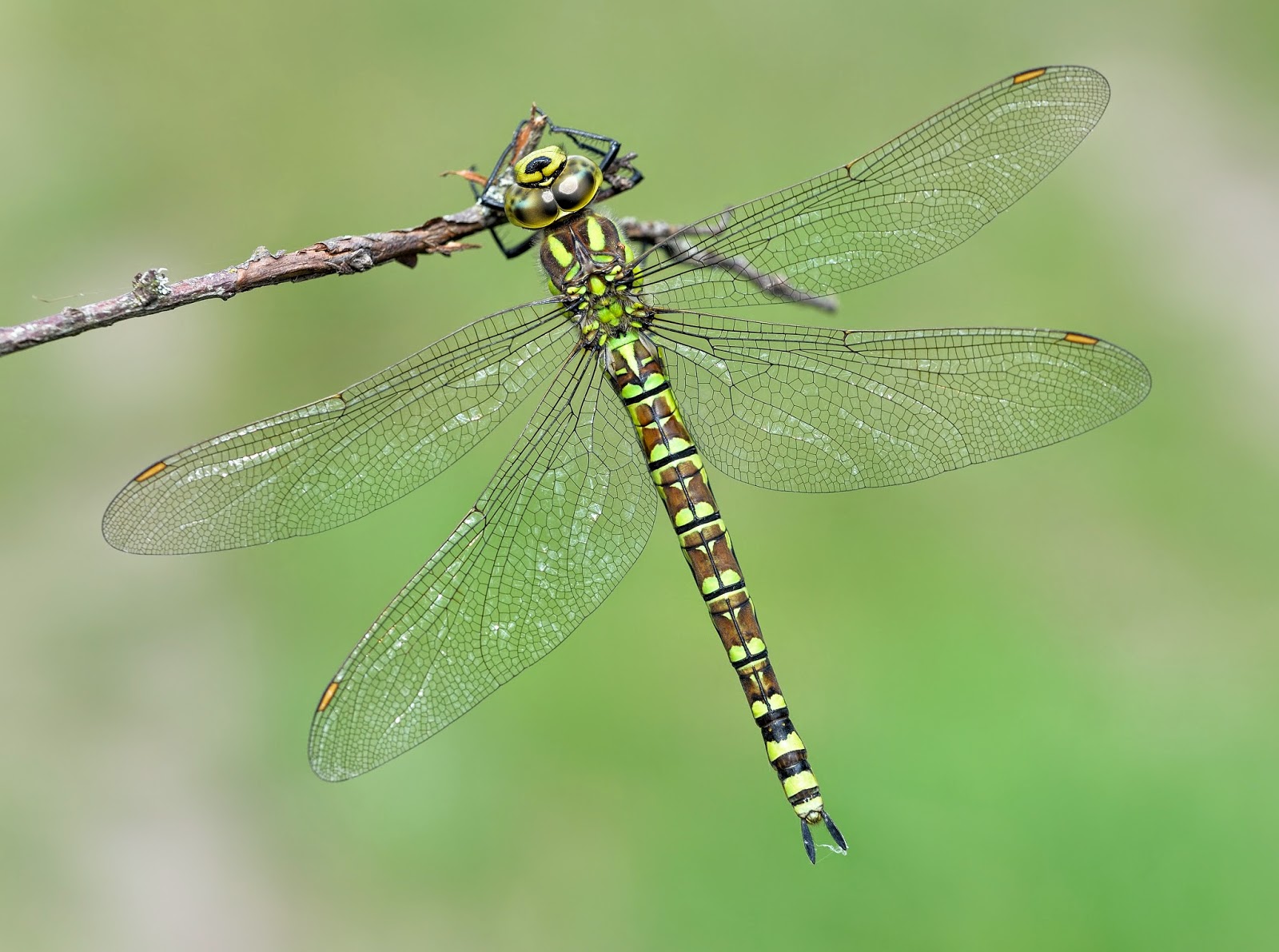 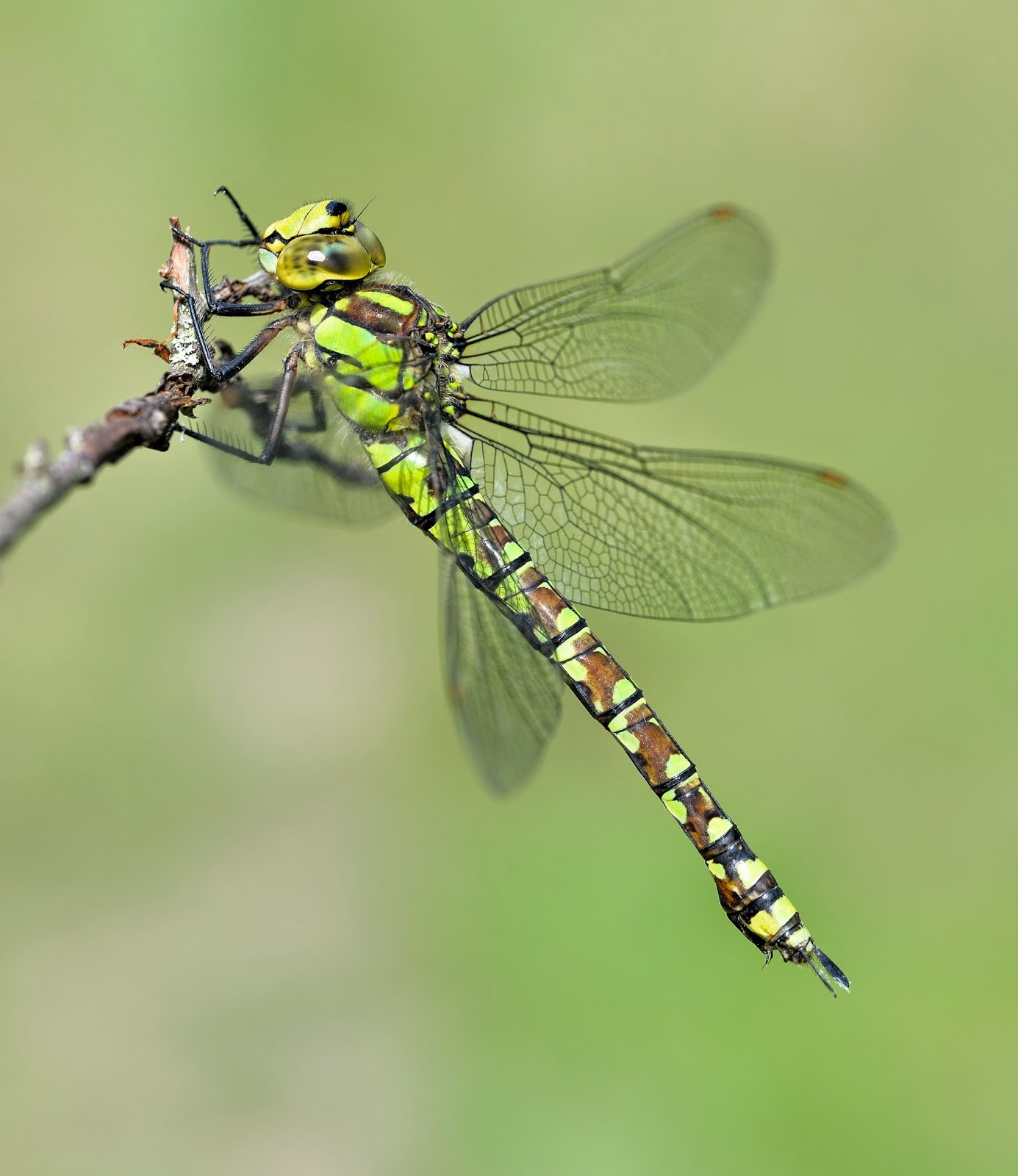 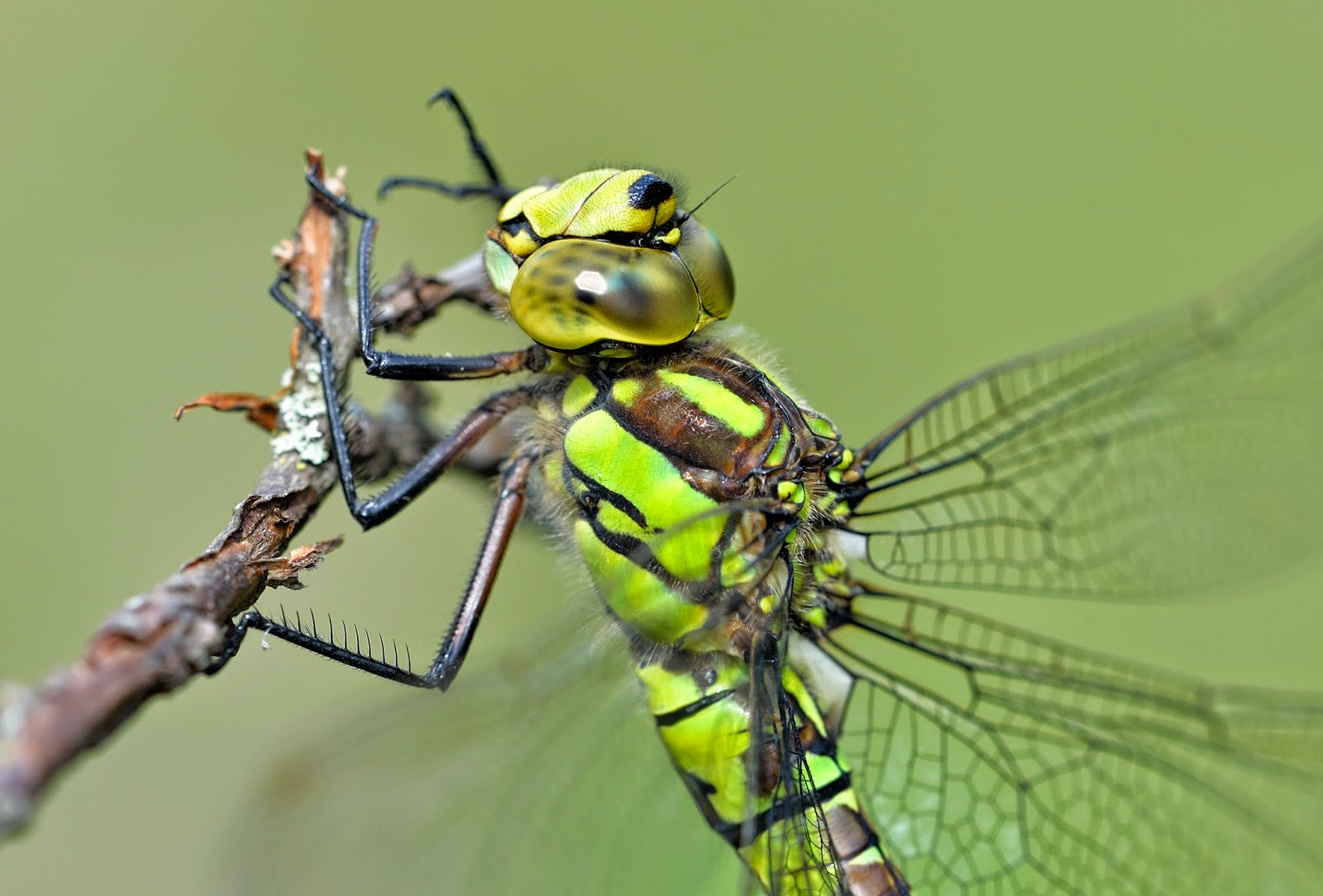 Following this I thought my luck couldn't get any better until further along the path I suddenly saw my main target, the Brown Hawker. It was patrolling a 10 metre length of the path and I was just hoping it would settle where I could get to it. It was about 10 feet away from me hovering near the top of the line of bushes when a Hobby shot over the bush line and made a grab at the dragonfly. I'm not sure of who was most surprised but perhaps it was the Hobby seeing me that put it off as it missed the dragonfly, only knocking it sideways, but that dragonfly somehow escaped certain death. The dragonfly took off over the bushes and I thought that was it. However, a few seconds later  it reappeared and after a short while it settled in a bramble bush where I was able to creep up on it and through moving some reeds I was able to get lots of pictures. I like to think that the Hawker was rewarding me for saving it from the Hobby. 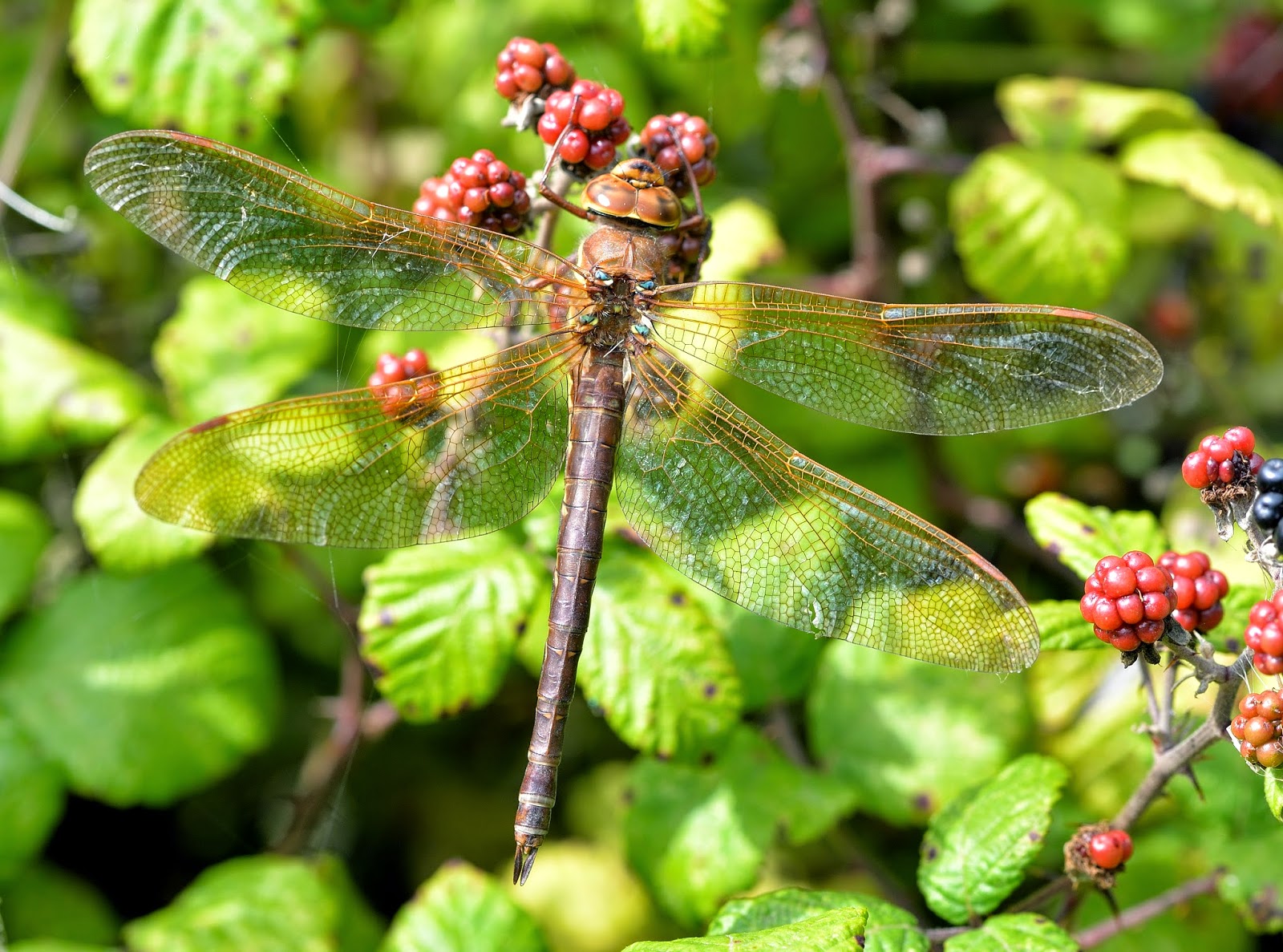 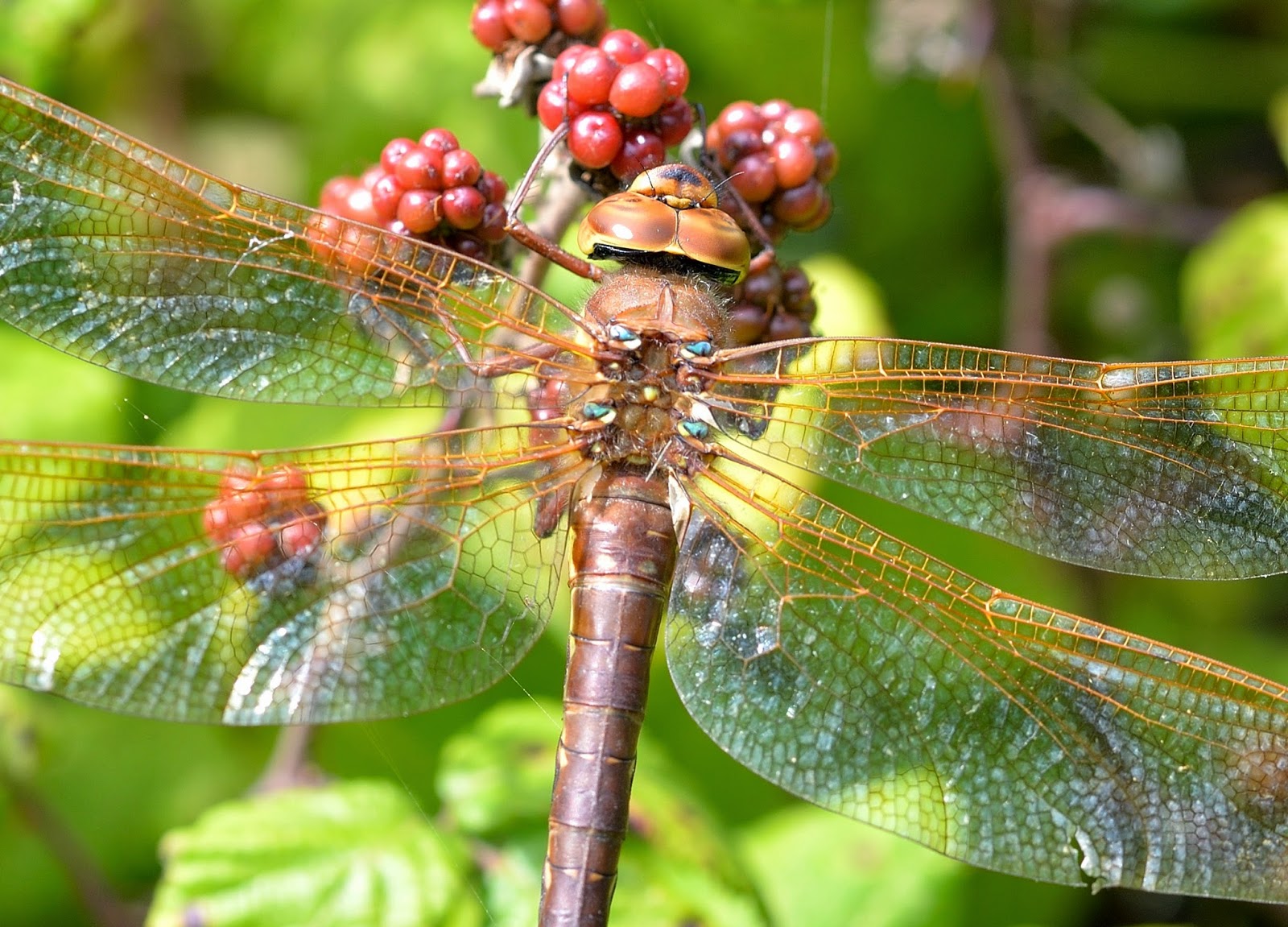 In the end it was quite a day and I was glad the gardening had to wait!!

Posted by Bob Eade. at 21:47
Email ThisBlogThis!Share to TwitterShare to FacebookShare to Pinterest