During our stay in Transylvania a friend of Anna invited us to use his weekend retreat in the mountain region in the Lonely Stone National Park.

What an amazing place this turned out to be. Peter was there when we arrived to show us our rooms, and he had also put some logs on in the hot tub!! From the balcony I could see a rather good looking meadow just a few hundred metres away and he told me there was no problem me going into the meadow to explore. This turned out to be the best little spot for me. Peter then left for a couple of hours, he was returning later with his wife and was going to cook us a barbecue. 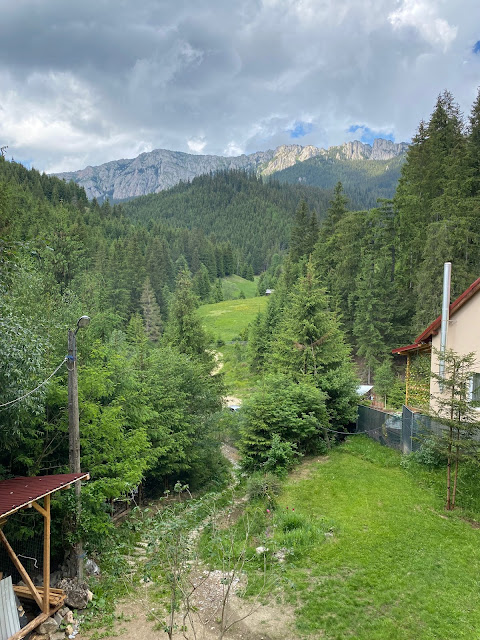 The view from the balcony of the meadow and mountains.
(On our last morning just before we left a Camberwell Beauty was seen flying around from this very spot). 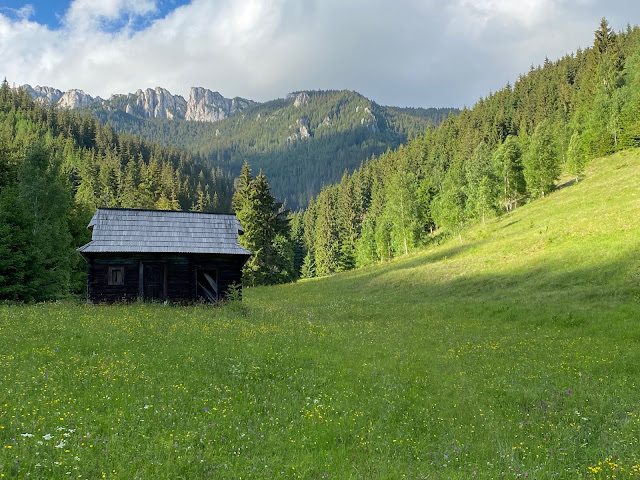 In the meadow.
Whilst Peter was gone I was keen to get to the meadow as the sun was beginning to go down and the meadow was partly in shadow already. Before I had even reached the meadow I was seeing roosting Woodland Ringlet, Marsh Orchids and a Mazarine Blue!! Once inside the meadow though I was seeing lots of Small Pearl-bordered Fritillaries and Black-veined Moths. I managed to visit the meadow 4 times during our stay and each time threw up more species.
The barbecue was also fantastic, and that was after a quick soak in the hot tub. Heaven came to mind!! 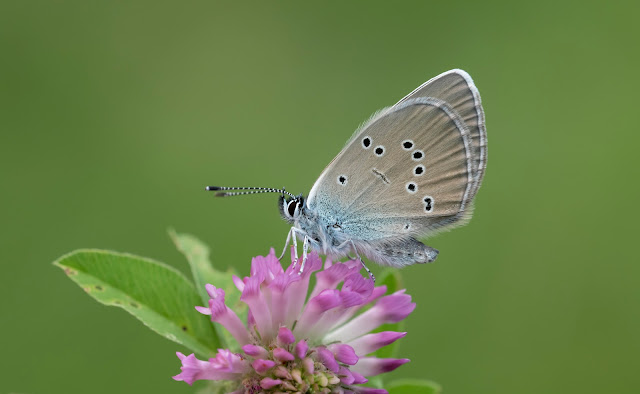 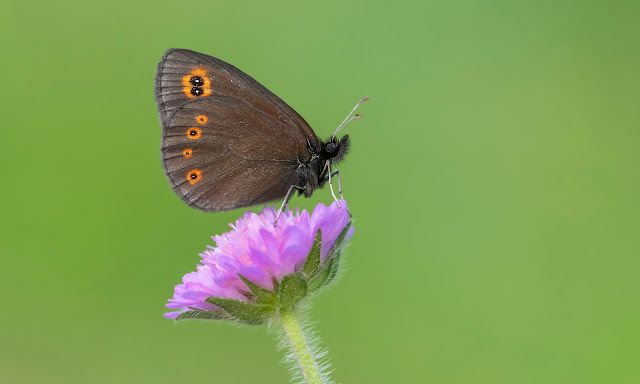 Woodland Ringlet.
The following morning I was up early and back in the meadow. Amazingly I didn't have a hangover following quite a bit of beer and schnapps. 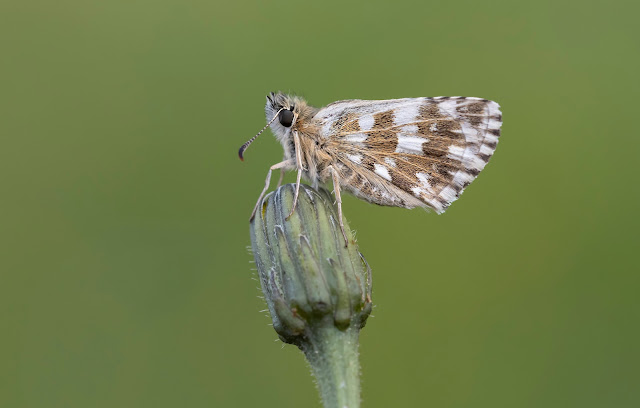 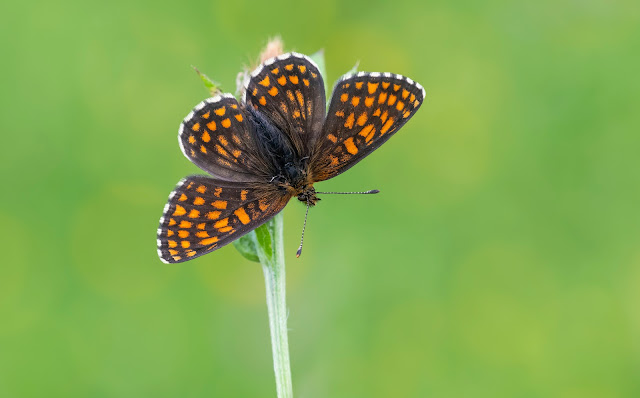 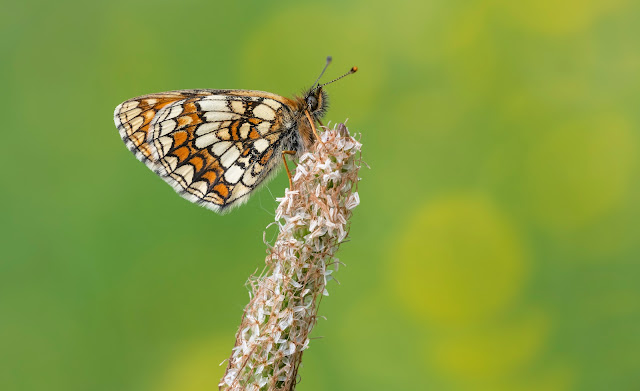 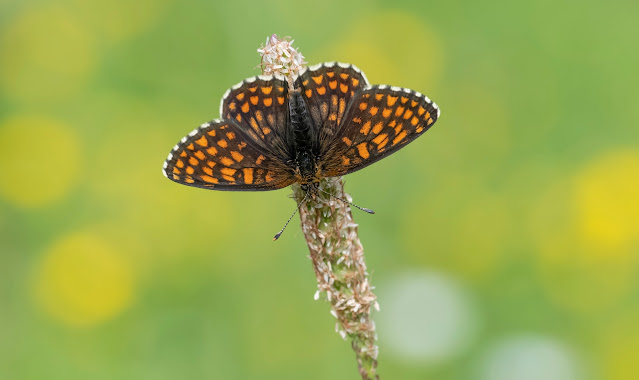 A freshly emerged Heath Fritillary.
After a couple of hours in the meadow and after breakfast Chris, Anna and I climbed to the top of the mountain (in the top photo). Going through the treeline was rather interesting as it was mega steep and very uneven. On the way up a Large Blue was seen and photographed and further up we saw several Orange-tips. Many more Woodland Ringlet including one that posed open winged high up the track. Just above the treeline was a very large Fritillary, but it was distant so I couldn't see if it was Silver-washed or a Cardinal. A probable Mountain Green-veined White and some Speckled Wood were also about. 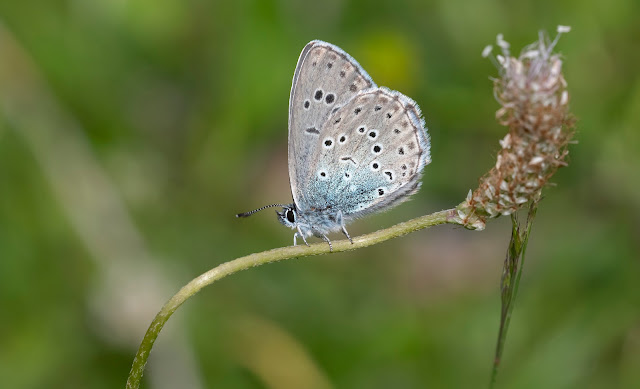 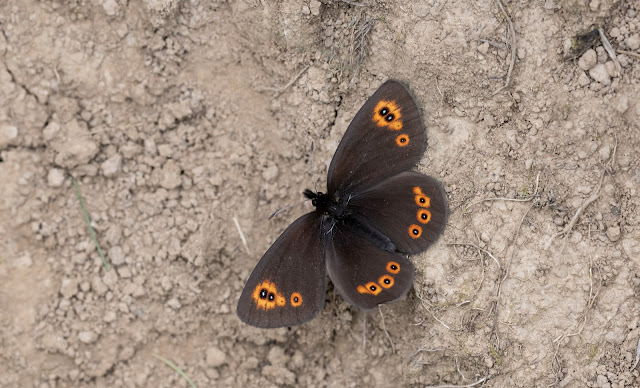 Woodland Ringlet.
The view from the top of the mountain was also very special. The only downer for me was seeing how many large areas of trees on the sides of the mountains had been cleared, one would think that they should be reasonably safe in a National Park? All the time we could also hear chain saws going so the area will unfortunately be poorer due to this destruction.
On the way back down the mountain Chris spotted a Black Woodpecker. It was feeding on a large Anthill so using trees to hide me I managed to get just about close enough for a couple of photos. These even made Matt a bit envious when he saw them. 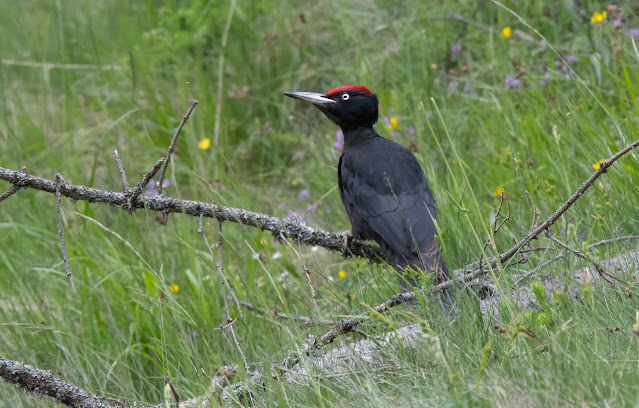 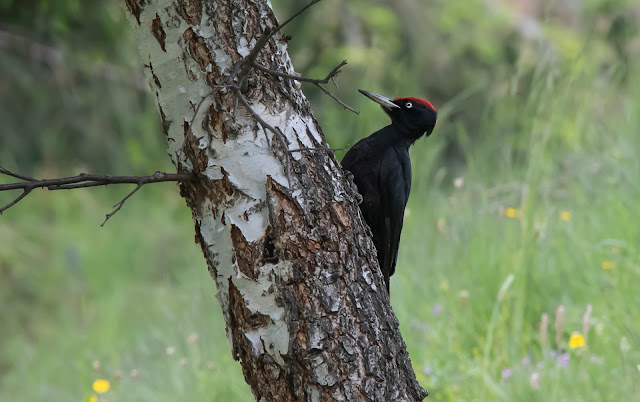 Black Woodpecker.
Once back down the hill I couldn't wait to get back in the meadow, and this visit was even better!!

Posted by Bob Eade. at 16:04
Email ThisBlogThis!Share to TwitterShare to FacebookShare to Pinterest