My Find of the Year!!

With the past week being very tough due to personal reasons I haven't done much photography or wildlife watching, but each July and August I do a survey for Butterfly Conservation around Friston Forest, and not wanting to let them down I had the good old Mother-in-law come to the rescue to help me out so I had a morning free to do the said survey.

On an extremely hot day I completed the survey in time to head over to look for the local downland Grayling. Most years I manage one or two visits to see this increasingly scarce Sussex butterfly.

With it being so hot the Grayling were keeping their heads down, sheltering from the heat amongst the small Wayfarer bushes and only 3 were seen. 2 were males and both of them spotted me from a distance and I watched them fly towards me where they promptly landed on my trousers and were keen to find salts in the fibres and also on my walking shoes!!
I also saw a female that as soon as it flew up from under my feet headed straight for the shadow of one of the bushes.

I carried on searching for more Grayling without success, and it was then that I spotted a Chalkhill Blue that looked very strange in flight with one wing being the normal light blue, and the other wing appearing very dark. I watched it for a short while before it landed to nectar on some Eyebright. With it being so hot the butterfly wasn't going to open its wings, but as I was pretty sure this was a gynandromorph I kept the camera focused on it just in case it gave me the slightest flash of its top wings. As it moved around the Eyebright I could see that each under-wing was different too with one having male characteristics and one being female.
Suddenly a normal male started buzzing over the top of the butterfly and as a female would do, it opened its wings in the reject pose. It was for less than a second that the wings opened but I was very lucky to get a shot that shows it to be a bilateral gynandromorph with half of the butterfly being male and the other half being female. It is even split right down the middle of the butterfly, and a slight distortion too in the body where the female side is slightly larger than the male side. This shows up even more on the under-side shot where the male side is seen to be smaller than the over-lapping female side. They are certainly a long way from my best photos, but in the conditions I have to be very pleased to get any kind of shot. 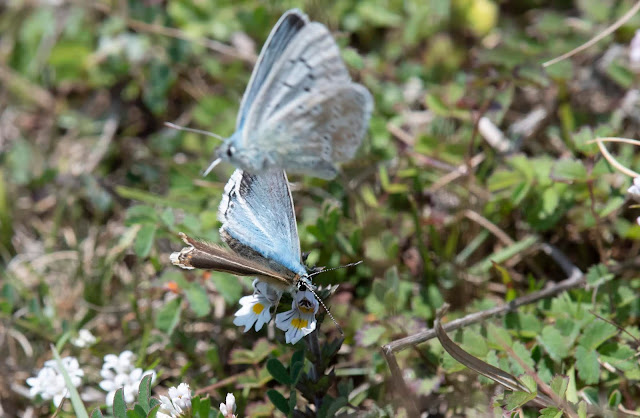 Gynandromorph Chalkhill Blue being harassed by a male. 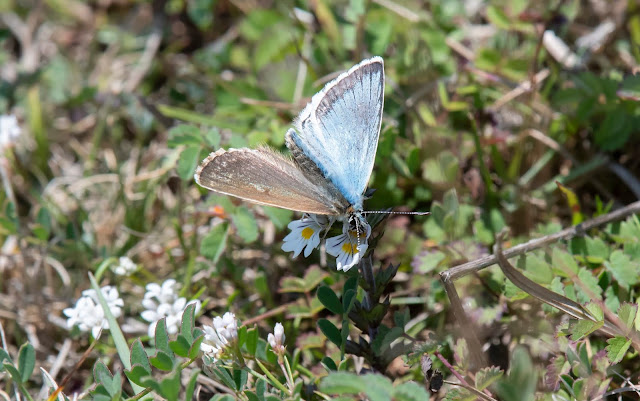 The luckiest photo I've ever taken!! Just a split second before it closed up again. 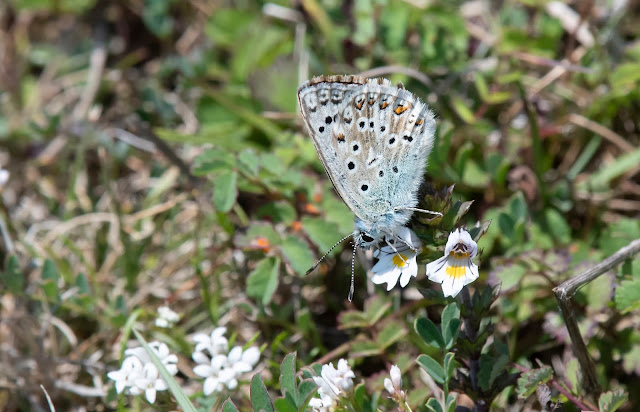 Male side of the Gynandromorph showing the over-lapping female wing.

In 54 years of watching wildlife I've never seen a gynandromorph before, and it is quite likely I will never see another, so this really was a once in a lifetime sighting!!

There were one or two other things seen of note. Including a large group of male Chalkhill Blues seeking  minerals from some sheep dung. It was only after getting home that I spotted in the photo a summer brood Dingy Skipper joining in. 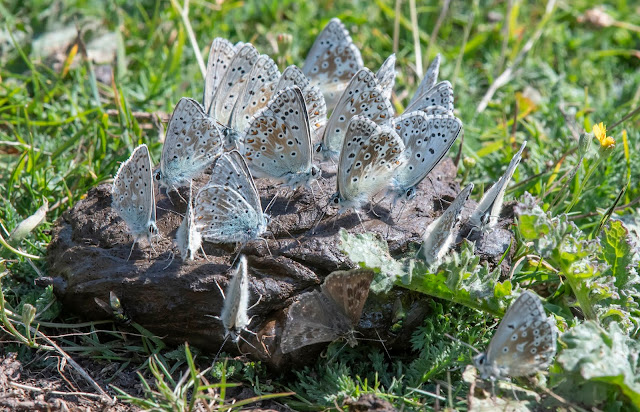 Male Chalkhill Blues and a Dingy Skipper on Sheep poo.

One of the 3 Grayling also stopped just long enough for a rubbish grab shot. 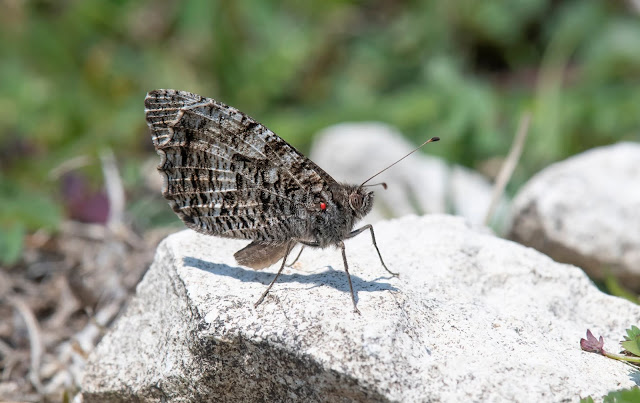 On the survey in the forest I also came across a stunning female Great Green Bush-cricket which appeared to be feeding on Greater Knapweed. One of those insects that are always great to see and are so impressive. 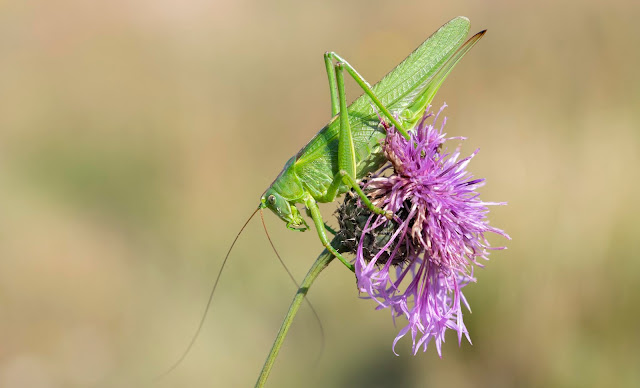 Generally the day was quite a success. Thanks to Jean for stepping up which allowed me the time to get out there.

Posted by Bob Eade. at 09:18
Email ThisBlogThis!Share to TwitterShare to FacebookShare to Pinterest