A couple of weeks ago Matt headed off to Papua New Guinea searching for lots of Birds of Paradise. The bad news for me was that he wanted a very early morning lift to Heathrow!!

It was not all bad news though as looking at a map, yes, I do still use those old fashioned things, I noticed that I could do a small detour to Somerset while I was out and about and try to catch up with the Large Blue. I have been trying to get down to Somerset for them for several years, and Matt reminded me on the way to the airport that it was actually 10 years since our one and only British Large Blue experience.

The one downer was that it was a Saturday, and being a superb day and in the middle of the flight season I had visions of the place being totally packed with other people with the same idea. Mind you, I thought I would be beating most there as I was hoping to get there around 8am.

The reserve I was heading to was a place I hadn't visited before and when I got there I couldn't find the entrance so there was a bit of wasted time there, but a phone call to a friend that had been there before helped me find the right spot.

Entering the reserve I was amazed to find I was on my own and it was only a few minutes before I had found my quarry. 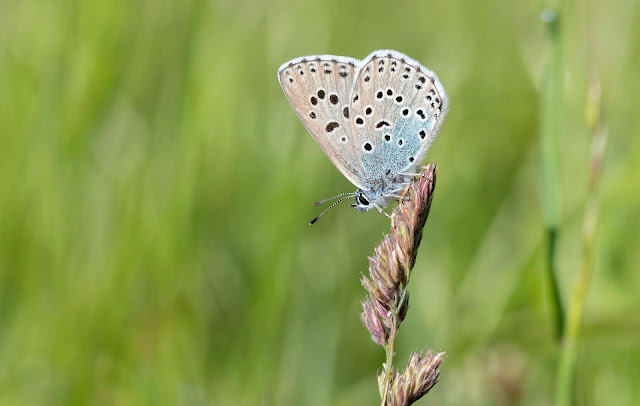 Being quite early the butterfly kept settling on the tops of the grass giving quite a nice pose and I had already improved on my previous best Large Blue shot.

Before this the day had started off in style as I had surprised a Roe Deer that was walking straight towards me on the entrance path. 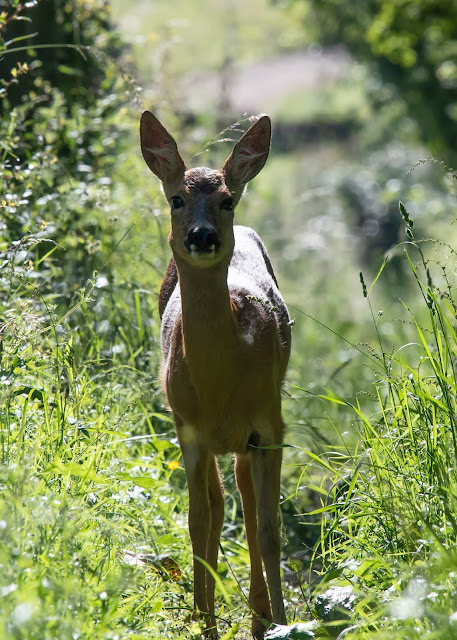 I then noticed I wasn't totally on my own as another person came into view that had been at the other end of the reserve. He told me that there is very little publicity for this reserve and not too many visitors come here. It was certainly evident that there wasn't the usual flattening of the habitat that is unfortunately so common on many reserves these days and the place was in excellent condition, a real surprise for a place holding such a rare beauty.

By now the day had warmed up and the butterflies were no longer settling for photography. After spending a bit of time chatting to the other chap I left him to it and did another circuit. Suddenly I spotted something blue at the top of  grass stem and on looking through the binoculars it was a mating pair of Large Blue. This was quite strange as 10 years ago exactly the same thing happened when I found a very old and worn male mating with a very fresh female.

This made me think of an ageing rock star getting lucky, mentioning no names of the Rolling Stones, with a gorgeous young model type as the female Large Blue was so perfect and he was anything but!!
I quickly took a couple of shots from a distance with the longer lens before making sure they were well settled and content!!
I then moved in with the macro lens to get more detailed shots. It was at this point that I noticed that they were not actually attached. Silly thoughts then came that maybe he was so old he had lost his libido and had let his young girl down. (The things we have to look forward to)!! However, I am pretty sure he had completed the mating as she wasn't in a hurry to give him the boot and move on.
I did check the long lens shots and they were apart even then so I know it wasn't me moving closer that split them up. 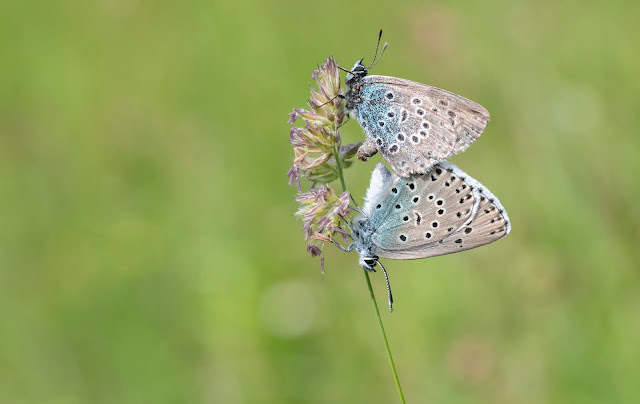 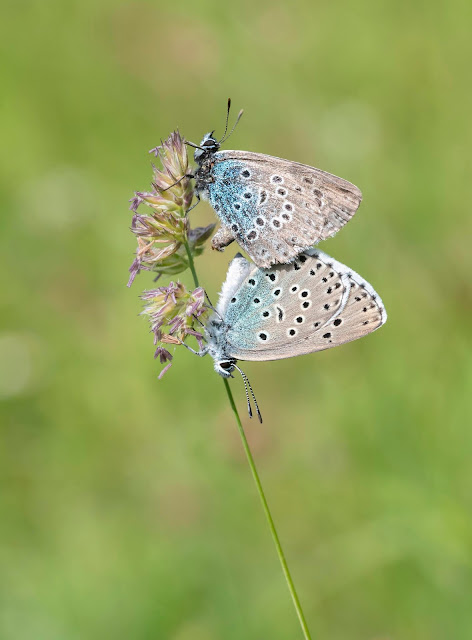 Moments before the male flew off.

Once the male flew away the female went just a short distance landing on several different perches before I finally lost her. 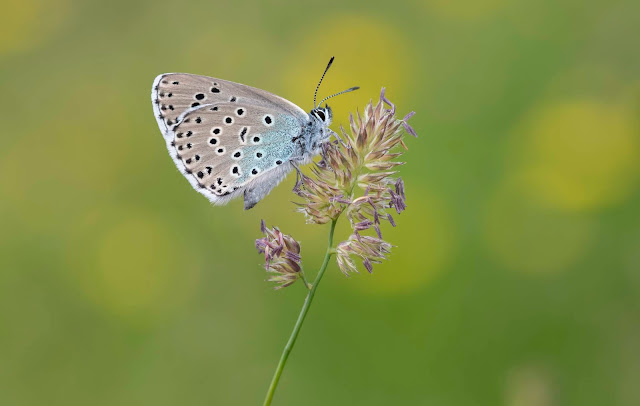 A little while later I went back to the car to get more cold water and lunch, but despite a few more visitors now being present I decided I really should stay a bit longer.
As soon as I got back to the reserve another very fresh female was seen. This one was seen egg laying so obviously had been out a little longer than the earlier female. I also saw a much older female egg laying. 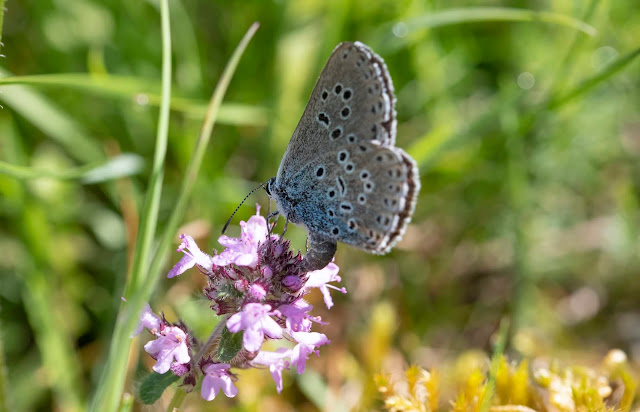 I then managed my favourite shot of the day with another very fresh individual. 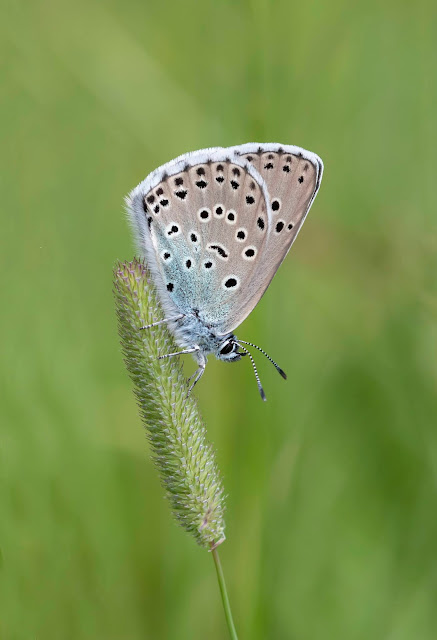 Also seen on this fabulous reserve were several Bee Orchids, Pyramidal Orchids, my first Ringlet of the year and a Small Skipper. Marbled White were also of course very numerous. 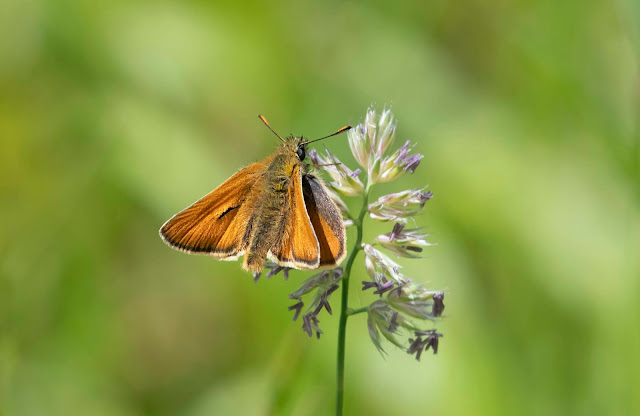 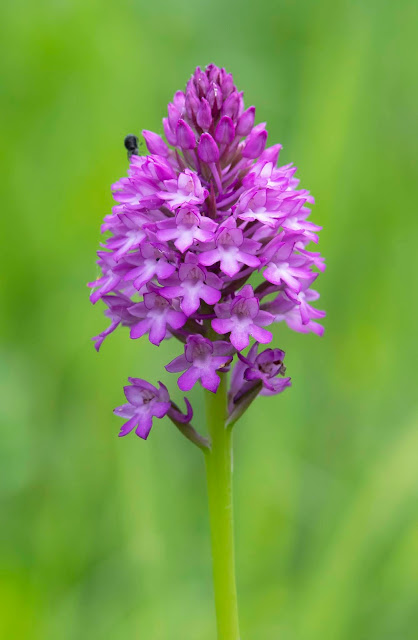 An extremely long and tiring day in the heat, but I was so pleased to actually get to see the Large Blue again, especially in such a great place, if only more reserves were peaceful and unspoilt like this.

It was a shame that the heat meant that there were no open wing shots, but there is always next year!!

Posted by Bob Eade. at 18:44
Email ThisBlogThis!Share to TwitterShare to FacebookShare to Pinterest