I probably don't spend as much time as I should with my 2 sons. Chris has been on at me recently to take him Badger watching. With us both being free on Friday night we set off to one of the sets I have watched on and off for around 43 years!! It seemed a perfect evening for it and on the way there I saw 2 Dark Green Fritillaries, my first of the year, several Corn Bunting and a single Forester Moth. We settled near the set and waited. On the opposite side of the valley I pointed out a Brown Hare to Chris. Unfortunately at this point a group of 4 people who were evidently having a boozy hike appeared. The boozy party decided to stop and drink nearby which didn't help at all but even though they were quite noisy I spotted a Badger further along the valley. The party eventually moved on and 3 more Badgers were spotted in the same area as the first one. I then saw the Brown Hare was still in the same field as us and it started moving towards us. In fact it kept on coming our way until it was filling the binoculars. Chris managed to get the picture below of it. At 8.50 4 Badgers came out of the set we were watching and they foraged nearby until the wind changed direction and 3 of them picked up our scent. The 4th one was still out until a jogger came along and asked us in a loud voice if we had seen anything interesting!!!!!!
On the way back to the car we passed some more sets where we had some really close views of these wonderful animals. 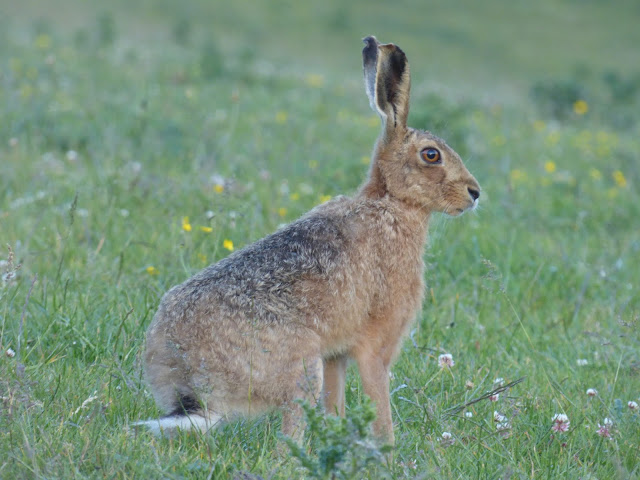 Around 3 am this morning Matt arrived home from a late shift to tell me that a large group of Bee-eaters had gone to roost near Firle and that at first light he would be going over there to see them. Would I like to go with him? Well, this is a bird that I've never seen despite several near misses, so, yes I would go as well. At around 4.50am we arrived at the site and we are able to see these magnificent birds waking up and preening. Soon the odd one takes flight and returns with a bumble-bee. Some were keeping hidden in the tree so it was difficult to see how many were there but 7 were visible at times. As the day warmed up they became more active and started sitting out on the telegraph wires, again taking flight and catching bees every now and then. At one point 9 were together on the wires with another nearby. Just after this they all took flight and gained height before all vanishing in an Easterly direction. An amazing start to the day!! I waited 57 years to see a Bee-eater and then 10 came along at the same time!! 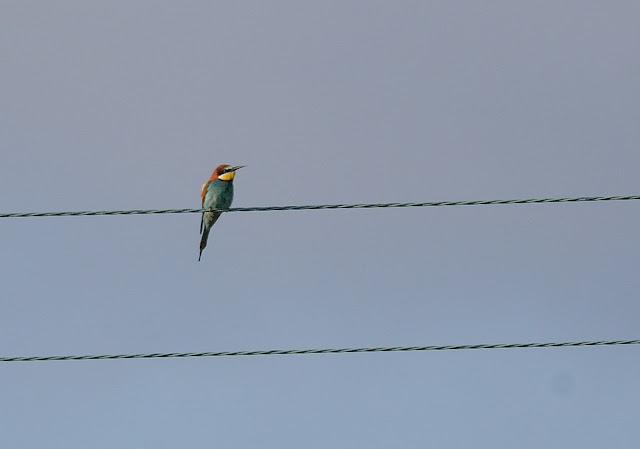 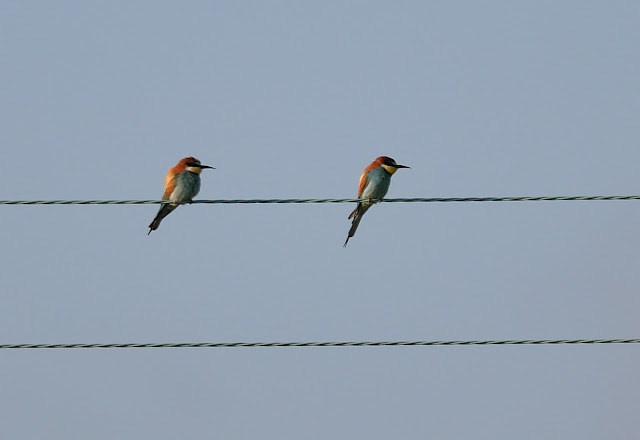 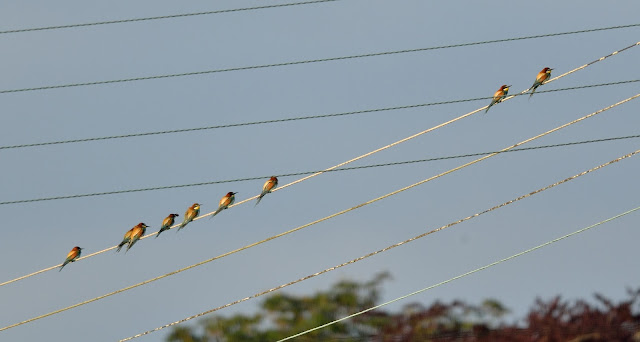 The group of 9 Bee-eaters.
The 4th from the left has a Bee!!