It is quite odd that despite seeing several Long Tailed Blues and a migrant Swallowtail the rarest butterfly I've seen this year is probably a Large Skipper!!!

There I was looking for the White Letter Hairstreaks and only seeing a few high up in the elms, so I walked further along the river to another colony. Once again I saw a few Hairstreaks but they were still all high up. I then noticed a Banded Demoiselle settling on some foliage, I managed a couple of pictures of this before it moved on. 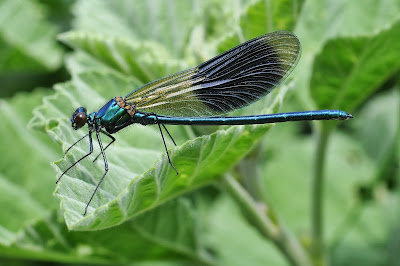 Suddenly this pale Large Skipper settled to my left. At first I thought it was just a faded individual, but I wasn't sure so I took several pictures before it flew off. Back home I looked closely at the pictures and became more convinced that it was probably an aberrant of some kind. I sent some pictures up to UK Butterflies and had an immediate response confirming it was an aberrant called ab. pallida. This is a particularly unusual butterfly to have an aberrant form. Once again I sent details to the County Recorder, Colin Pratt, and he tells me that there has never been a record of an aberrant Large Skipper in Sussex before. The following day I tried to relocate the butterfly to show Nigel but we could not find it. I wish I'd known the rarity value when I had found it. 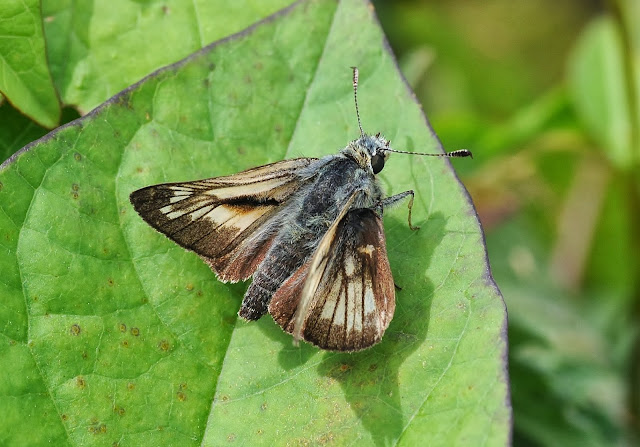 So with this Skipper and the melanic form of the Riband Wave moth that was 2 firsts for Sussex in one day!!
Posted by Bob Eade. at 18:03
Email ThisBlogThis!Share to TwitterShare to FacebookShare to Pinterest