During the winter I struggled to find quantities of Wall Brown larvae and I was a little concerned that the 1st brood this year would be a bit thin on the ground.  However, on my general walks around the area there did appear to be reasonable numbers flying.

Last week I managed to get my annual 1st brood count on a regular circuit that I have been using since 2009. It was clear early on that my count was going to be pretty good, and that was the case even though numbers on the 2nd half of the circuit were very poor as I believe the butterflies were by then finding cover in the hot sunny weather. By halfway I had hit 54 butterflies but the return I had only added 2 more until a final flourish in the last few hundred metres where the breeze was making it a bit cooler. In the end I hit 66 which was a new 1st brood record, something I never expected after the winter larvae hunting!!

All 66 were males, but that is not too unexpected as the females are generally hidden in the longer grasses laying eggs or just waiting to be found by males. 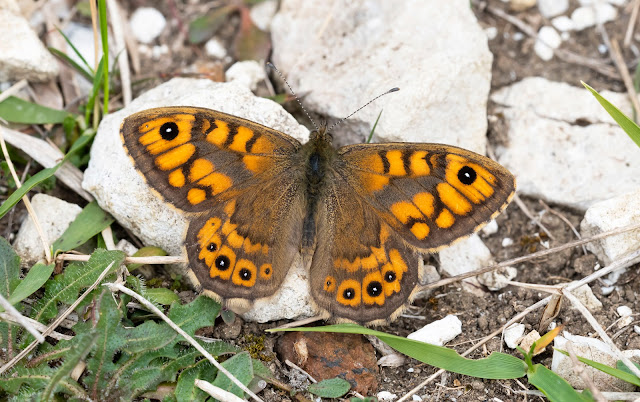 Male Wall Brown.
In all the years I've been studying Wall Brown I have never come across an aberrant form, but this year I hit lucky when a rare aberrant form anticrassipuncta landed next to me, and although I only managed a few quick record shots of her, it was a magic moment. This form has very attractive extra large wing eye-spots.  This is only the 2nd ever record of this form in Sussex, with the other one being in 1967 and was caught by a butterfly collector. 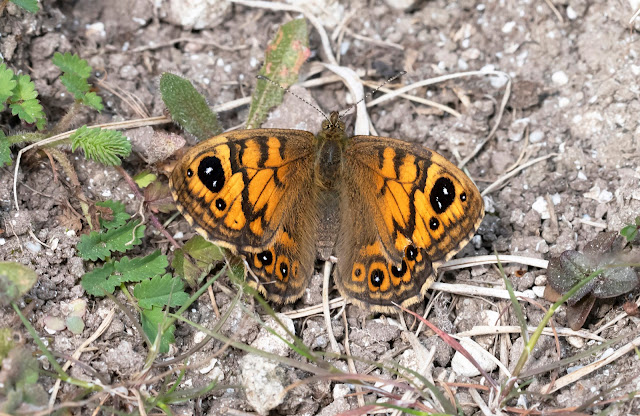 Female Wall Brown aberrant form anticrassipuncta.
With the 2nd brood generally being much larger than the 1st brood I wonder if I will get a record count of that brood too which currently stands at 119.

Posted by Bob Eade. at 15:17
Email ThisBlogThis!Share to TwitterShare to FacebookShare to Pinterest