2 years ago I was approached by Pete Eeles, who was in the process of writing his superb book 'Life Cycles of British and Irish Butterflies' as he wondered if I had a photo of a Wall Brown larva in the pre-pupation state.

At this point in time I had only seen this once before and that particular larva was in the process of being eaten by Ants.

I thought the only way I could get the shot Pete was after would be to bring a larva home and try to rear it through, not something I am that keen to do as I prefer to get my shots in the wild.

As it happened it did give me the opportunity to find out several things concerning timings etc. of this early part of the life cycle, and eventually after watching it daily the larva got into the position that Pete and I were after.

Strangely, the following day I actually found 2 more pre-pupation larvae on my usual patch which was much more exciting, although one of these was eaten by Ants the very next day.

The most surprising thing was that the pre-pupation stage went on for 5 days, this is the stage when the larva is at its most vulnerable as the skin is still soft and the larva is not able to escape any of the predation species.

Fortunately, by rearing the one at home it did take away several of the hazards and after completing the pupation stage the butterfly, a female, emerged 29 days later.

This year I decided to have another go to see if all the patterns were the same. This time the pre-pupating stage took 4 days, and on the 4th day I checked the larva in the morning and it was still as it was, but in the afternoon I spotted that something had changed. I quickly got the camera and then for the next 18 minutes watched and photographed as the larva struggles to get out of its old skin and turn into a pupa. It all happened so quickly, and even though I had missed the start of the transformation, the head case had already come off along with a good part of the skin, it was fascinating to watch and it was probably the most the larva had moved in its entire life. Any Spider that saw it could have easily taken and eaten it.

I would have liked to have had a movie sequence as it was surprising how much the larva wriggled, but as I was hand holding the camera it wasn't really feasible. 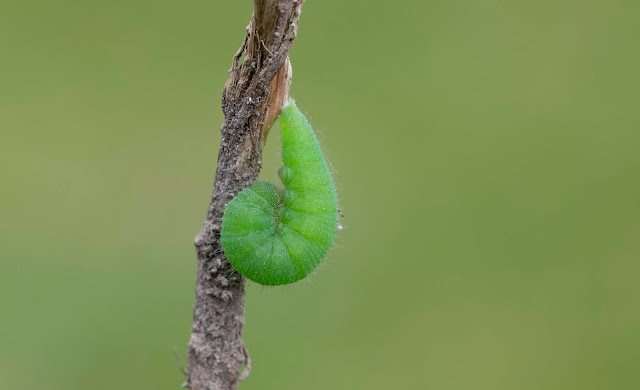 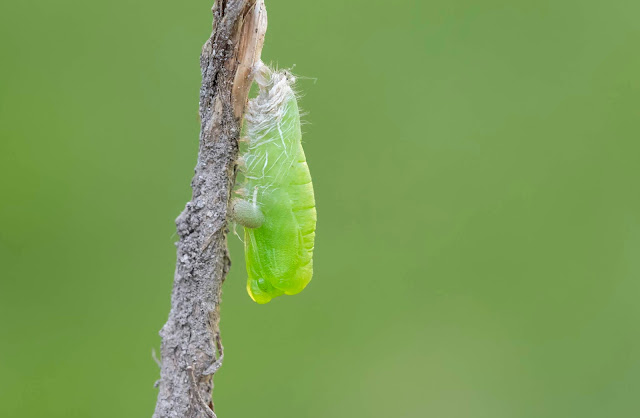 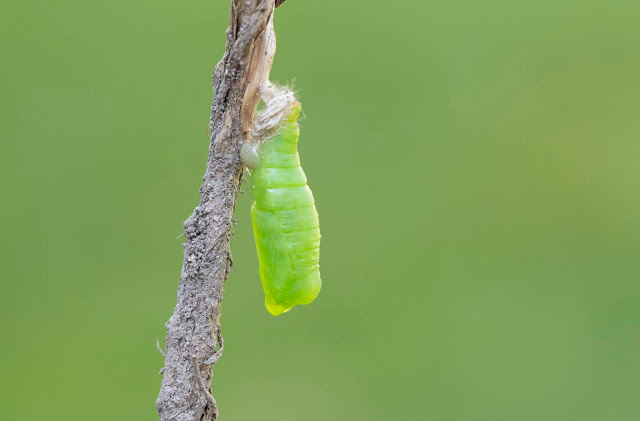 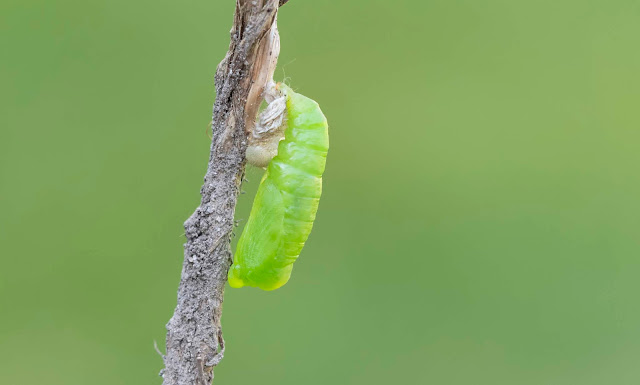 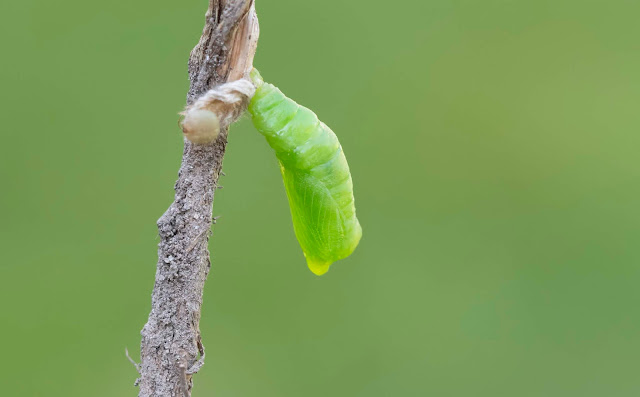 Swinging around trying to lose the old skin and head casing. 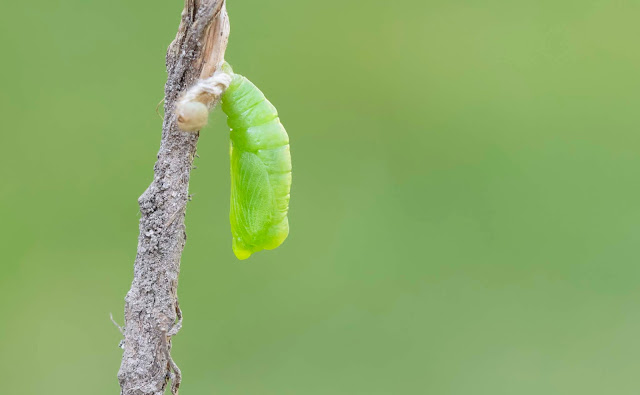 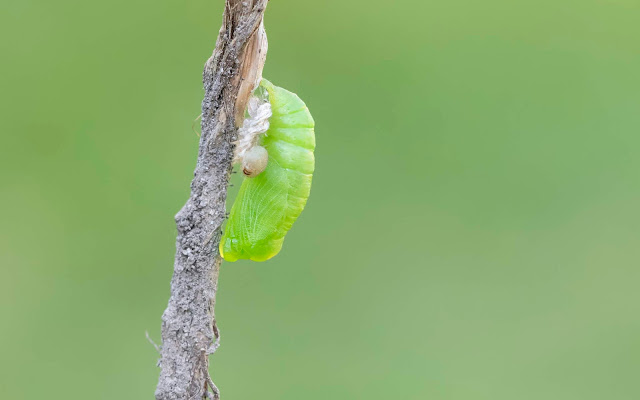 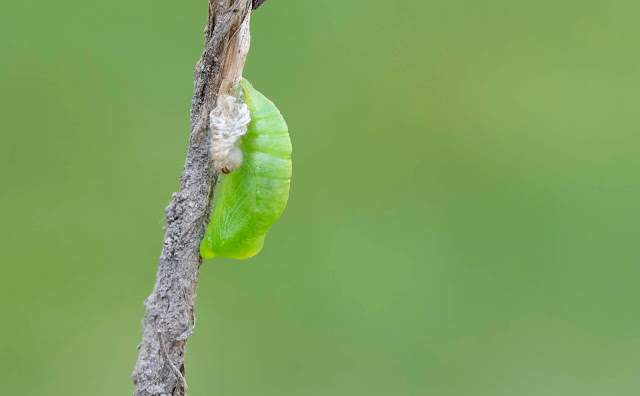 After 18 minutes of watching and the pupa shape is just about complete. 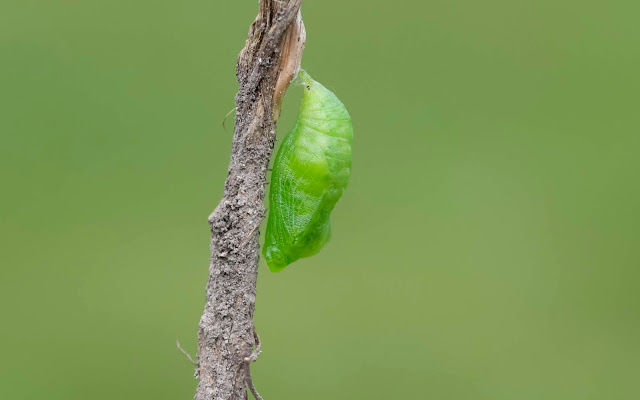 30 minutes later the old skin and head case has fallen away. 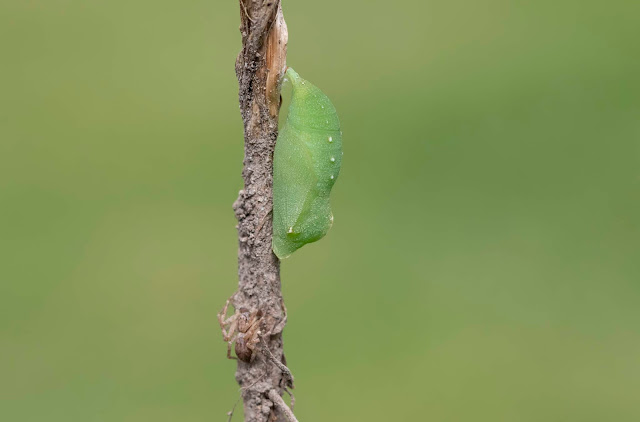 It wasn't until I was processing this shot that I spotted the small Spider just below the Pupa. I quickly had a look in case the Spider was having a very big meal. I couldn't see the Spider on checking and it looked as though the pupa was still okay.

I now hope that the pupa makes it through to becoming a butterfly. This is such a perilous time for the insect and so many do not make it through due to predation or the weather.