The Marsh Fritillaries of Wiltshire.

Two years ago I had my first visit to Martin Down which is just on the border of Hampshire and Wiltshire, and is a National Nature Reserve. Two years ago it was without doubt my wildlife highlight of the year seeing many Marsh Fritillaries as well as the best display I have ever seen of Burnt Orchids.
For several weeks I had been looking forward to a follow up visit so long as I could fit it in whilst the Marsh Fritillaries were on the wing, and that the weather would be ideal for the trip. It is after all, quite a long way to travel if conditions are not perfect.

I had mentioned the planned trip to Clare, and she was really keen to join me as it would be a new species for her.
The forecast looked perfect for the Thursday, but a Kent trip had been planned with Nigel, however when he called to say he was under the weather it was decided we should go for it!!

Picking Clare up just before 7am we made pretty good progress and arrived at Martin a little after 9am. Unfortunately I couldn't remember which path I had taken 2 years ago so we went off course a little, but it was wonderful listening to the numerous Corn Bunting, Yellowhammers and a couple of Turtle Dove. We also saw several Small Blue along the tracks, which at the time was my first Small Blue of the year.

At last I got my bearings back and I told Clare that we should see our first Marsh Fritillary at any moment. Seconds later we both saw our target, and for the next few hours we enjoyed the spectacle of watching this fabulous species. 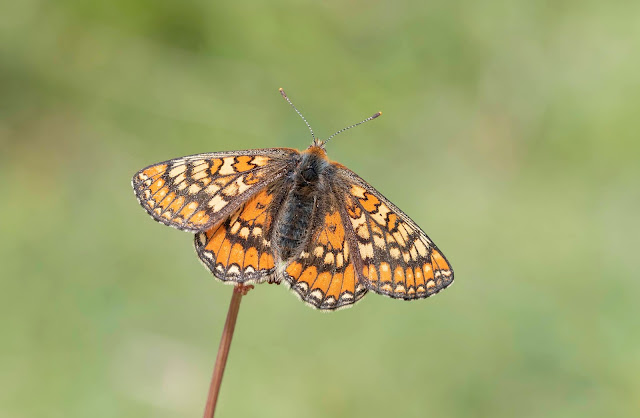 I don't know how many we saw but it was certainly good numbers, and as we were quite early in the flight season most were in very good condition. 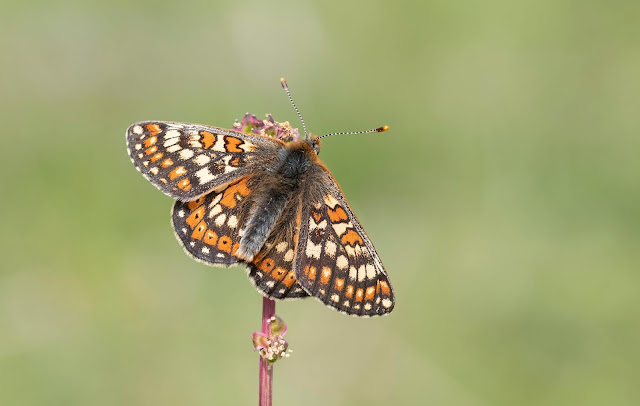 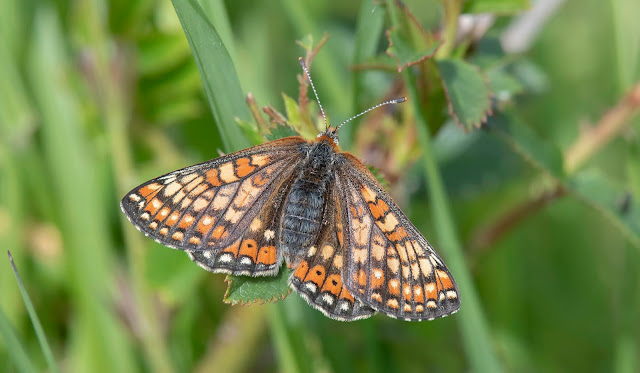 Female Marsh Fritillary in the vegetation.

In the sunshine the Fritillaries were very active and rarely settled for any length of time, but as the clouds were meant to build up later I suggested going to look for the Burnt Orchids that were further along the track. Unfortunately we were too early for the best display as the group of 10 or so were not in flower yet, but a lovely group of 3 was still well worth seeing. 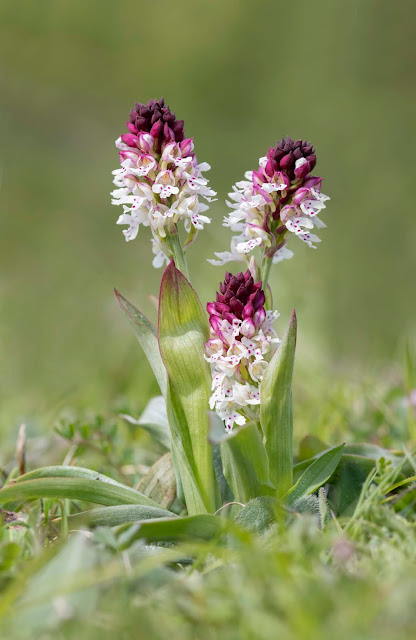 After seeing the orchids we headed back to the Fritillaries as the clouds were building. I went to look to see if I could find any roosting butterflies. After a while I saw Clare photographing something in a bramble bush so I went to investigate. She had found a lovely male Small Blue that was trying to warm up in the now cooler conditions. 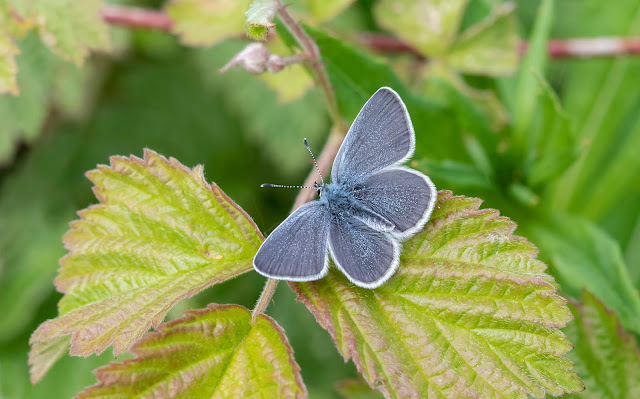 It was just after this that I suddenly spotted a female Marsh Fritillary that was crawling out of the grass and was clearly just emerging. By now an annoying breeze had picked up and the poor butterfly was being blown about on the grass blade that it was hanging on. 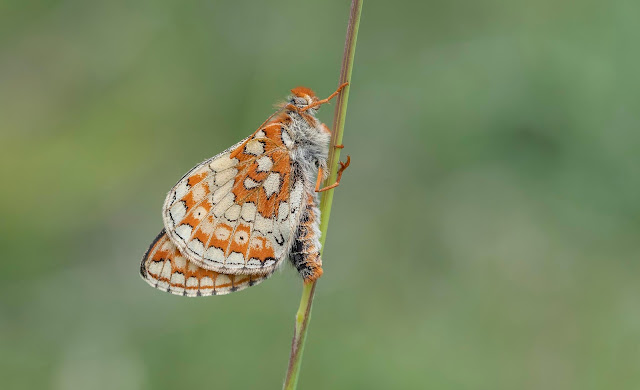 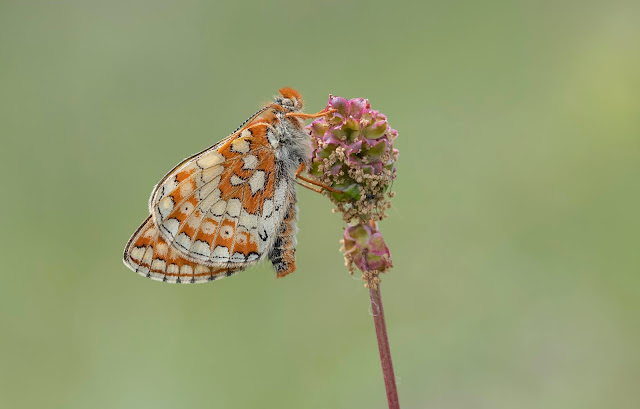 Eventually the sun came back out, but only briefly. Just enough time to encourage her to open her wings ready for flight. However, before she could fly the heavy clouds came back again. 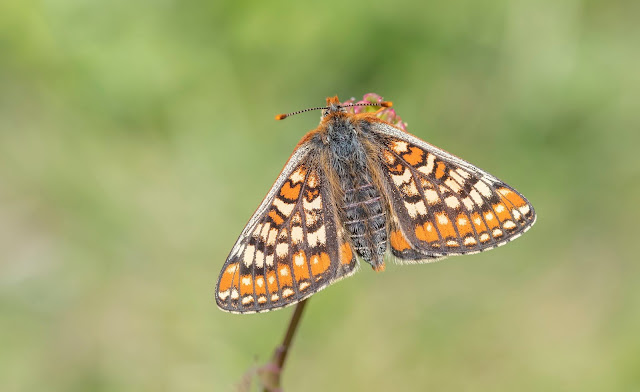 As open as her wings managed.

After this we left her in peace, placing her in more cover for her safety and we continued searching for roosting butterflies. Eventually a couple of male Marsh Fritillaries were found preparing to go to roost, although the weather had other ideas as the clouds once again thinned and the sun returned but not before we managed to get some nice under-wing shots of the 2 males. 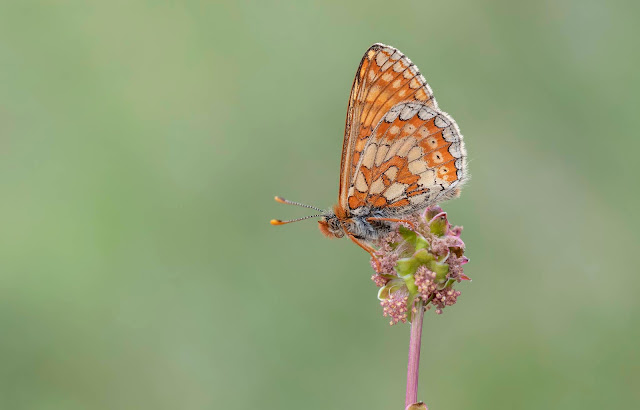 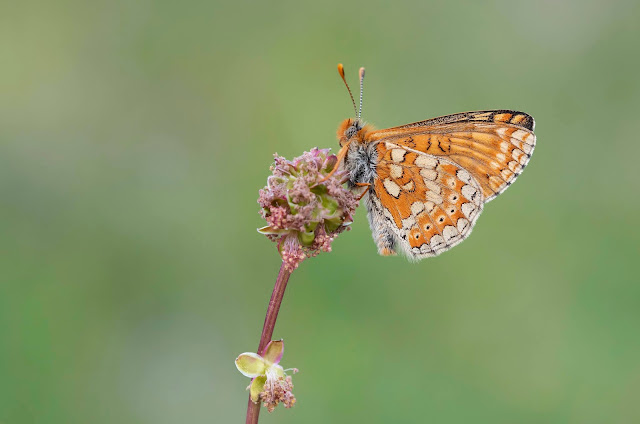 With the long drive back we eventually headed back to the car seeing a few birds on the way including a fine male Stonechat and a Yellowhammer. We also saw a Hobby hunting amongst the bushes. 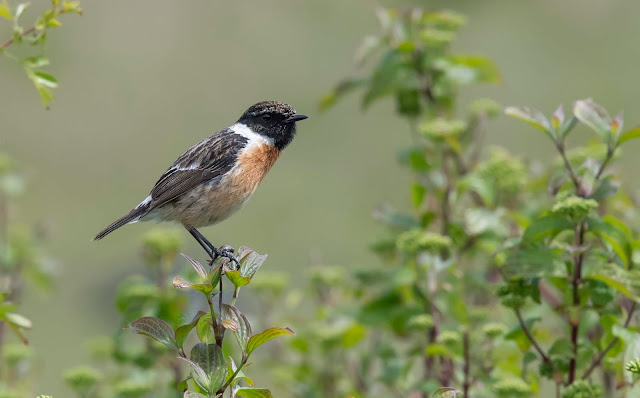 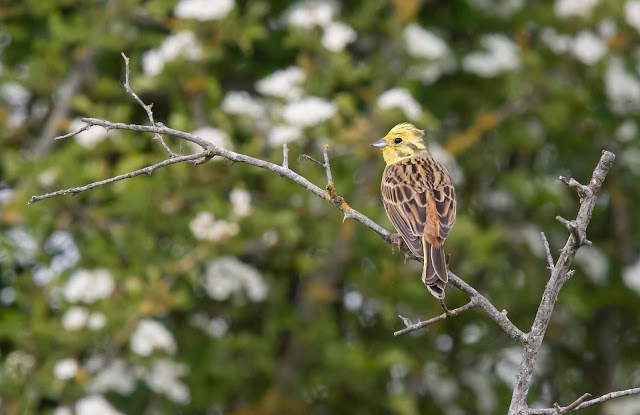 It was while I was creeping up on the Yellowhammer that I spotted a large larval web in the Hawthorn bushes. Immediately I thought it was the web of the Small Eggar. At this point I hadn't seen the local ones so I was really pleased to see it. There was also a further 6 webs in close proximity. This rare moth is known to be more numerous in the West of the Country, however, I was still very surprised to see so many of them. 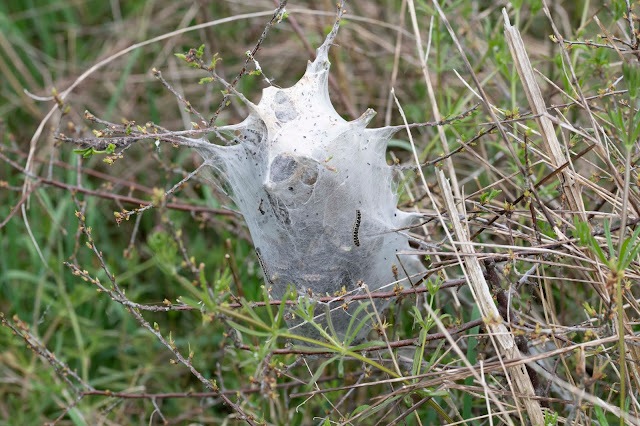 Unfortunately it was then time to leave this wonderful reserve and hit the M27. However, it was once again a fantastic day and my thanks to Clare for sharing the experience and it was hopefully a day for her to remember.

Posted by Bob Eade. at 15:50
Email ThisBlogThis!Share to TwitterShare to FacebookShare to Pinterest