As I have possibly seen more Wall Brown larva than anyone else it was a bit strange that yesterday I found one that I couldn't decide if it was a Wall Brown or Speckled Wood larva. It seemed to have a bit of both in it with it being a brighter green than normal for Wall as well as more defined markings down the back although not as defined or bright as most Speckled Wood would be. The lateral line was more Wall Brown. Fortunately I had some thoughts from some experts in the larva field and it was confirmed it was indeed a Wall Brown larva in its 3rd instar but it was thought it was approaching the moult into its 4th instar. This is probably why it appeared a little different, either that or the rain and dull weather we have had for so long has affected my brain!!
It was good to get the macro lens out for the first time this year as well.

The photos I managed were not brilliant due to that weather mentioned as well as a stiff breeze. At least when the weather is poor it gives me the excuse to do a bit of larva hunting. During this year I have tried 4 times with a total number of Wall Brown larva found so far standing at at least 13.
After the search I carried on walking where I was pleased to see a Woodcock in flight as well as a smart looking Brown Hare. Bullfinch have also been quite numerous recently with a few seen and many more heard. 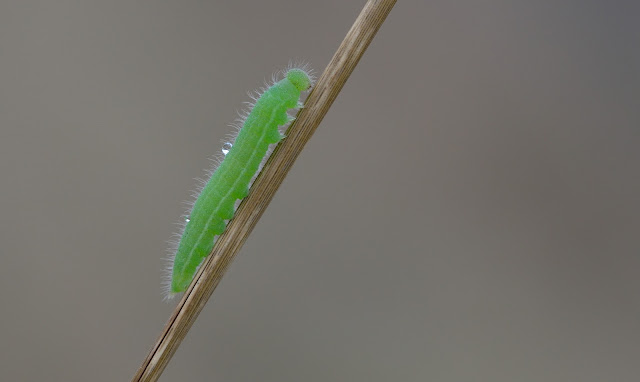 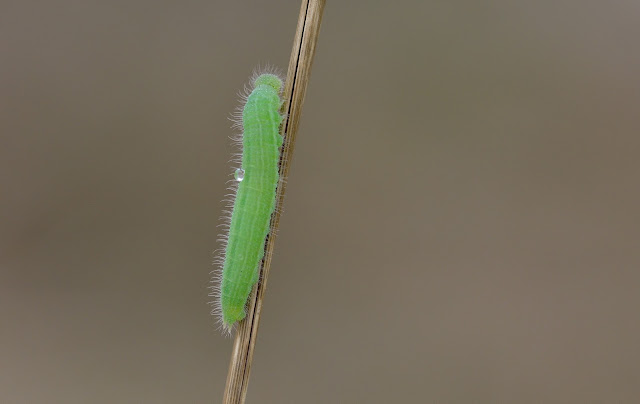