Scottish Orchids and a Butterfly.

I guess the main targets for our Scottish trip was the dragonflies, that we did very well with, but I have not seen a few of the northern orchids either so I was hoping for at least a couple of new species here too.

One of the speciality species, the Lesser Butterfly Orchid, I had seen a few times before, both in the UK and in France. In fact we did have a small site here in Sussex that held a few until the area became too dry and overgrown in recent years. On our first afternoon in the area of Loch Maree we stumbled across the first of many of these lovely delicate orchids. So subtle compared with the Greater Butterfly Orchid we get here in Southern England. The following day in the site further along the Loch we found many more Lesser Butterfly Orchids growing on the roadside. 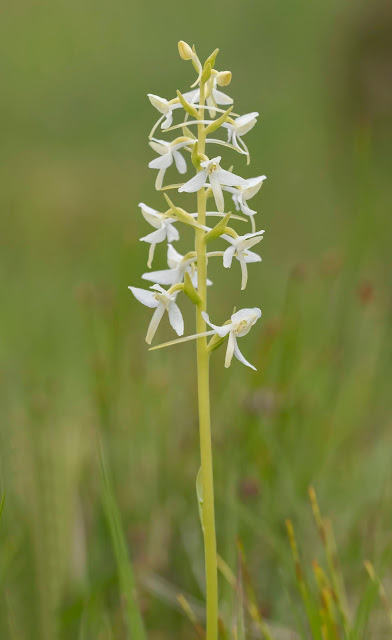 Lesser Butterfly Orchid.
Also at this site I saw my only butterfly species of the Scotland part of the trip, we did stop off in Cumbria briefly to hunt for butterflies, The one butterfly species I did see in Scotland though was a great one to see even if it was far from a beautiful species. The Large Heath I have only encountered once before during a trip to the Lake District with Nigel. The Scottish Large Heath though are a different subspecies and one I obviously haven't seen before. This form is a lot plainer than the other 2 forms found in the UK and looks more like a larger Small Heath. It is though, like the other 2 forms, a rare butterfly and very restricted in its range so it was a fabulous encounter. Just 2 of these were seen with the first one being a bit worn and tired, but the 2nd one was quite a smart butterfly. 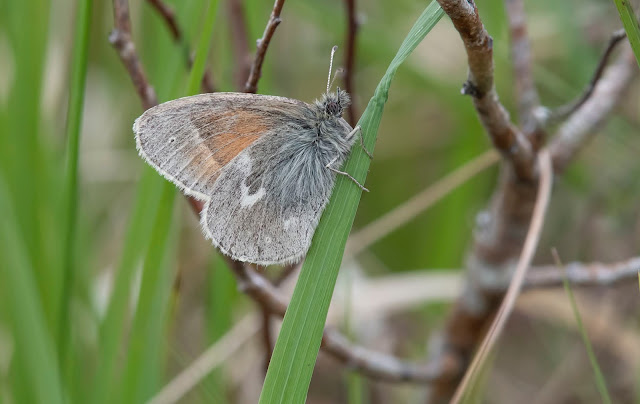 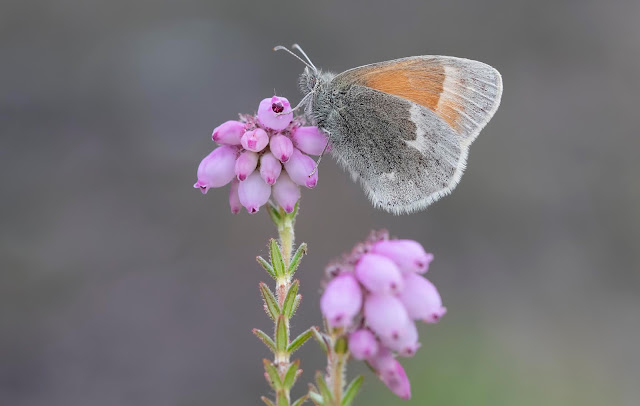 The other Large Heath (subspecies scotica).
Other interest on this day included a beetle that was new to me, the Rhagium bifasciatum. Found in an area of little light and too much breeze so I was amazed I managed to get an image of any quality. 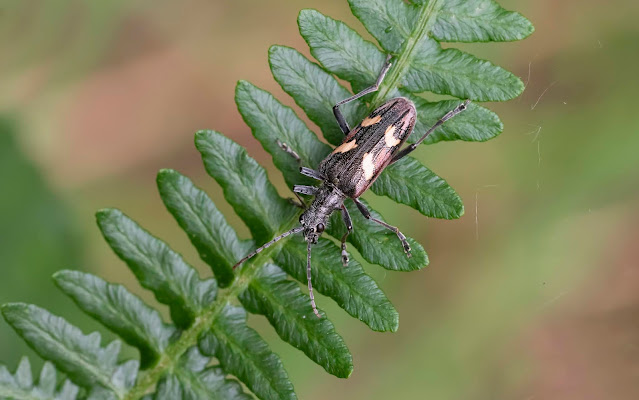 Rhagium bifasciatum.
At the site we had all the Azure Dragonflies I had a superb ichneumon wasp land just by me. This reminds me of my very first macro image which I took about 50 years ago when I was 13 of an ichneumon wasp on a roadside at Offham. I can remember it as if it was just yesterday, and that one shot was possibly the reason that I got hooked on this type of photography. 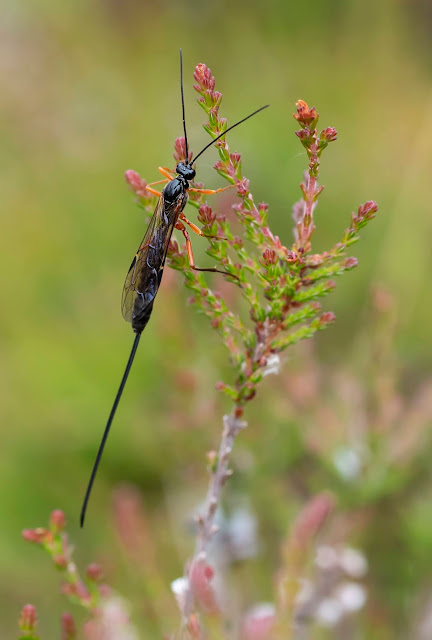 Ichneumon sp. 50 years on.
Everywhere we went there were Bordered White moths which were obviously being relied upon by many bird species to feed their young. At one site around Loch Maree I had one of the many Willow Warblers in the area land in the tree just by me. Fortunately I had my telephoto camera as well as the macro, so I was in a position to quickly get a couple of shots before leaving the bird to feed its young with the Bordered White moth it had caught. 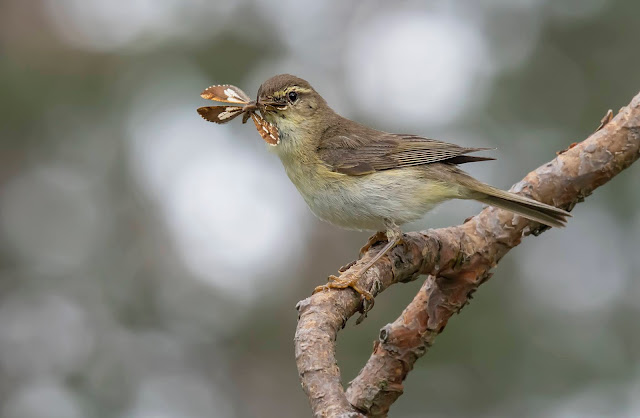 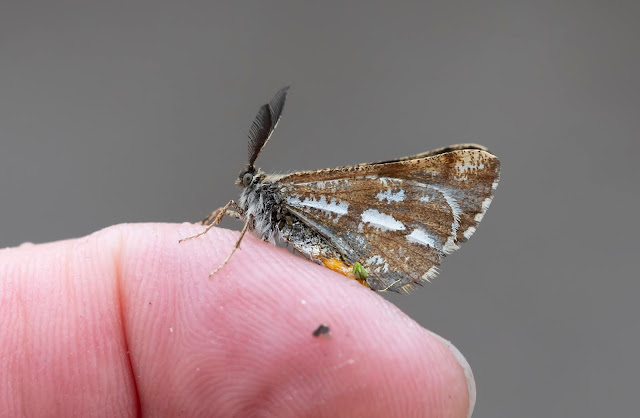 Bordered White moth that I found on my trousers after a walk through wet foliage.
Whilst we were hunting the Azure Dragonflies Matt found a Lesser Twayblade Orchid. A species I had not seen before. How he spotted it I do not know as it was tucked below Bracken and was probably no more than 3 inches high. Once again it wasn't the easiest photograph to take as it was so small and in a dark area, but when you have a new species you have to try!! 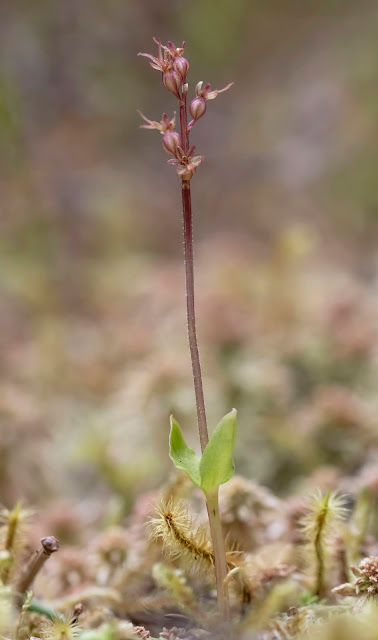 Lesser Twayblade Orchid.
It was now time to leave the Highlands and head a little south to the Cairngorms. Before we had left Sussex a good friend of mine who now lives in Scotland gave me details of a site for the Coralroot Orchid. Another orchid I never thought I would get to see. It was also very easy to find and a site we were virtually driving past as well. Although it was in a Pine Forest the area was only yards away from housing on the edge of a small town. Another orchid growing in dark shaded woodland and most of the images were not too good, but a few were just about good enough to keep. A lovely delicate little orchid. 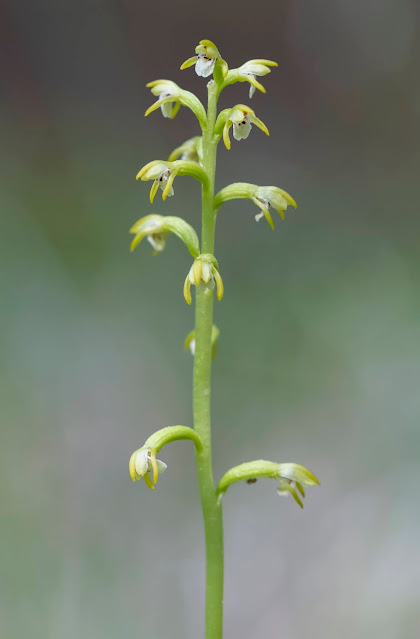 Coralroot Orchid.
Another Orchid we were hoping to see was the Small White Orchid. An orchid that Matt and I had seen in Bulgaria, but neither of us had seen it in the UK. There were many in a private garden, including one or two 'large' Small White Orchids!! We also found a couple in another site that Matt had tried before and another site my friend had suggested. However, we only found 2 at this site and they were well past their best, so I decided I was happy with the shots from the private garden that I had taken with a telephoto. 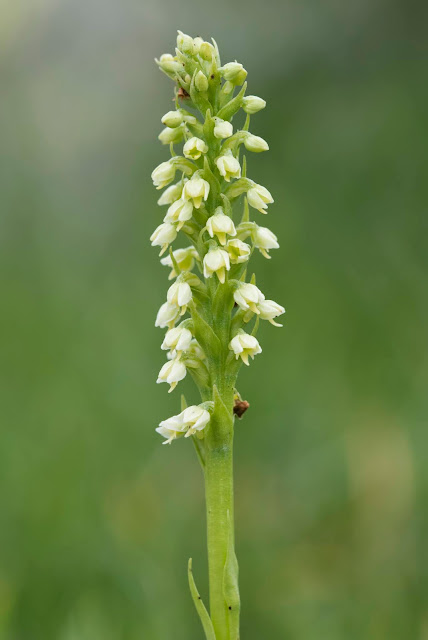 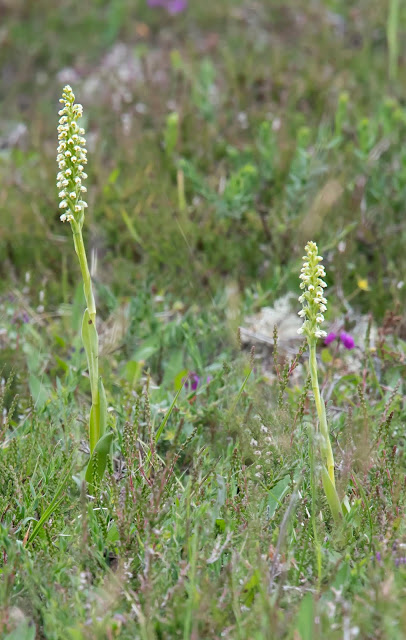 Small White Orchids Scotland 2021.
In so many of the boggy areas wherever we went there were Sundew plants growing, and although most were tucked away in other foliage I was pleased to find one that was easier to get to with the camera. 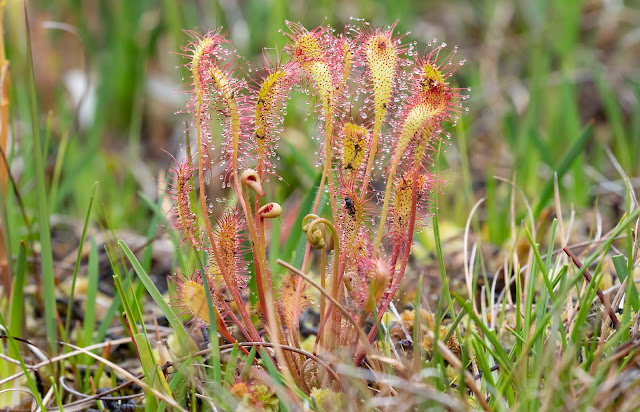 Sundew.
We had many other plans hoping to see some of the mountain specialists and although we had a good view of a Golden Eagle, and I saw a very wet soggy Mountain Hare the weather eventually beat us as the tops of the mountains were stuck in clouds and lower down it just rained. We decided to head south a day earlier, but to have a brief stop off on the way back to a lovely little site in Cumbria hoping to see the High Brown Fritillary, the most endangered species of butterfly in the UK.
On leaving Scotland though we did stop off at a site that Matt knew for the Slavonian Grebe. One of the few sites this beautiful bird breeds in. We saw the bird almost straight away and I leant over Matt to get a grab shot through his car window. Not ideal conditions and unfortunately it doesn't do this cracking bird justice, but it was a lovely bird to see. 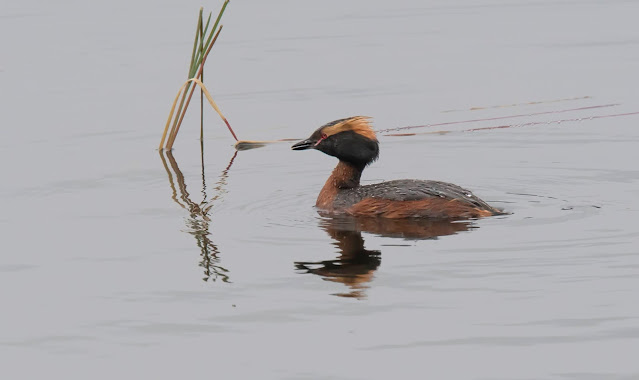 Slavonian Grebe.
As we headed south we saw many Northern Marsh Orchids on the roadside, another species I hadn't seen before, but with no way of parking I had to be satisfied with quick views as we drove past.
Down in Cumbria the sun returned, actually before we really wanted it, as the butterflies were more active than we would have liked. The High Brown and Dark Green Fritillaries are very similar and when they are this active it is hard to know if you are watching the really rare one or the very common one!! It was a case of trying to photograph any that settled and hope to identify on the camera. There were some other species flying around and I saw my first Ringlet of the year as well as a Small Pearl-bordered Fritillary, that I had missed from our local site. A few Small Tortoiseshell were also seen. 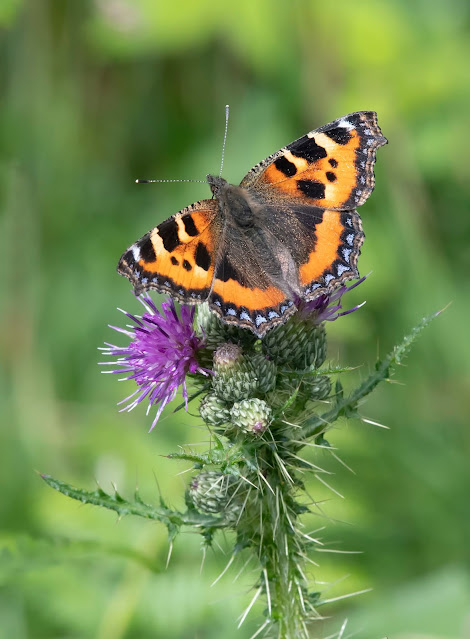 Small Tortoiseshell.
Matt then called me to say he had a definite High Brown Fritillary that had dropped down a few times on a Thistle and if I stayed in that spot it will hopefully return soon. By now the temperature had increased further and the butterflies were even more active. It seemed the males had become much more interested in hunting out females than nectaring on the thistles. Eventually a Fritillary dropped down on some thistles slightly further back and I stood still taking a couple of photos and hoping it would visit the nearer thistles. However, it took off and vanished in its search for a female. On the camera though it did show the slightly concave wing and markings of the High Brown Fritillary. This was also a different High Brown to the one Matt photographed. Nearly all the other Fritillaries were of the common Dark Green variety and I guess the High Brown had only recently started to emerge. Probably a week later the search would have been much easier. 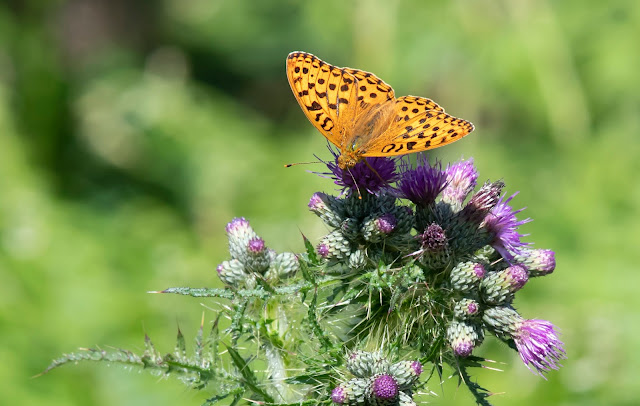 High Brown Fritillary.
A successful ending to our northern adventure with many new species seen and some photographed. Matt then continued to drive south and we eventually arrived back in Seaford at around 10pm having listened to Wales being beaten in the football. Many thanks to Matt for taking me away for the few days and organising it all and thanks to Iain for suggesting a few sites to visit.

Posted by Bob Eade. at 10:26
Email ThisBlogThis!Share to TwitterShare to FacebookShare to Pinterest