Just over a month ago Matt suggested that it would do me good to get away from the house for a few days so I could chill out and forget about all my woes.

He was co-leading a Naturetrek tour in Shetland, but on his return to the mainland he was going to try to add the Azure Hawker to his list of British dragonflies. This was actually the last species he needed to complete the British list, well, that is until another new species makes it over here!!

I decided that the trip would indeed be a good idea so as usual I left Matt to do all the planning etc and all I had to do was to get to Gatwick, with a lot of help from Chris, get on the plane and meet Matt at Inverness.

I arrived in Inverness after a wonderful flight up with great views of the West coast from Cumbria, over my brother's neck of the woods near Loch Lomond and the length of Loch Ness. Matt was waiting just outside the airport in shorts and sunglasses as the sunshine was wall to wall. It was decided we would head straight away to the site of the Azure Hawker at Loch Maree. Unfortunately, on the way there the weather decided to go downhill and by the time we were on site it was considerably cooler and cloudy and the chances of finding this extreme rarity had diminished. In fact the only dragonfly we saw was a roosting Golden-ringed Dragonfly which I photographed in a light drizzle. The Broome behind the insect did however brighten the image up no end!! 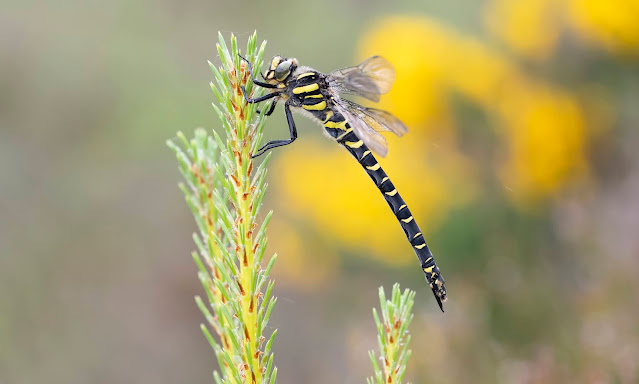 Golden-ringed Dragonfly.
After getting back to our superb B & B it was decided to head back over the following day to continue our quest to find the Azure Hawker. I also really wanted to see the Northern Emerald Dragonfly. As I had only been to Scotland once before photographing wildlife nearly everything we would see would be a new species for me.
The following day we headed back to Loch Maree where we were going to have the best day of the trip, although of course we didn't know this at the time. Apart from dragonflies we were also going to see other northern specialities, although they will appear on my next blog. At this first site we did see a couple of White-faced Darter, a species that I had seen before around Loch Garton a few years ago when I did my previous Scotland trip with Nigel. However, there was still no sign of the Azure Hawker.
There was one site left around Loch Maree where the dragonfly is sometimes reported from so we decided to head on a little further. At this site we came across an area quickly which had a large amount of felled trees and as we stepped into this area we saw a couple of Hawkers flying around. After a few minutes of trying to get better views we realised that we had found our main target, and not just that, but we had a large number of them in the area. We reckoned there were at least 8 and quite likely over a dozen present, but as they settled only briefly and they were very active an accurate count was never going to happen. 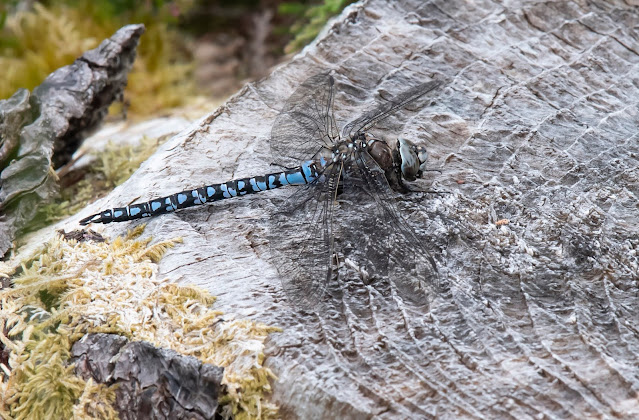 Azure Hawker.
One of the interesting things was that as the weather cooled the colour of the dragonfly also changed with the blue giving way to a more brownish colour. 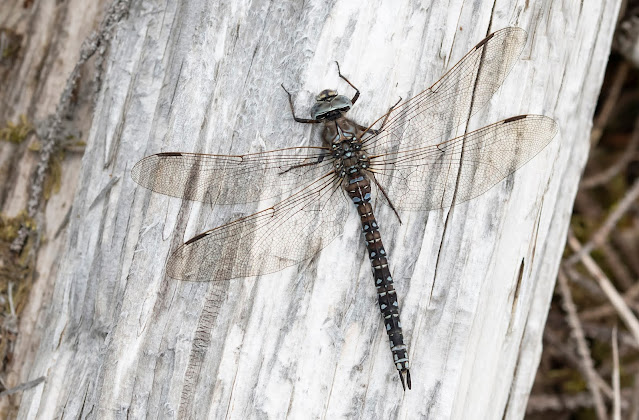 Azure Hawker.
There were a few other dragonfly species at this site too with a couple of Four-spotted Chaser and a couple of showy Golden-ringed Dragonfly too. 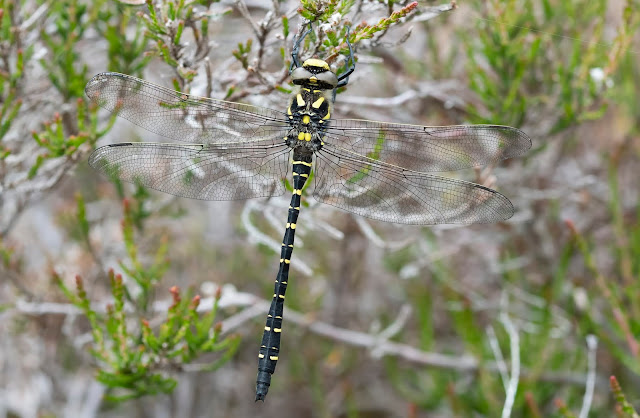 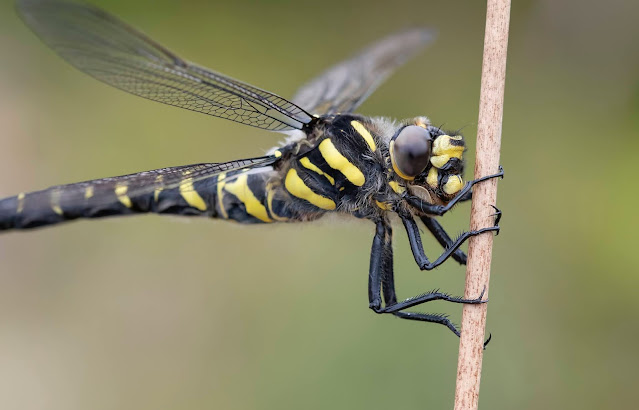 Golden-ringed Dragonfly.
After this extremely successful stop off we headed back to the site we visited the day before to see if we could find my Northern Emerald. By now the weather had deteriorated again, but it was not as cool as the day before. A few high flying dragonflies along the tree tops were almost certainly our new target species, but there was no way I could say I had seen a Northern Emerald with a sighting like that. I then spotted a smallish dragonfly fly low over the path ahead of us so we quickly headed that way, but we couldn't see anything there. Then, in the corner of my eye I spotted a bit of movement a little way out in a boggy area. Not knowing what it was, but suspecting it could have been a dragonfly we headed out into that area. Once again a quick scan produced nothing. We were about to move on when I somehow spotted a newly emerged Northern Emerald hanging on to some Heather. Without a doubt this was the species of the day and as it was now cooler it certainly wasn't in a hurry to move. The biggest problem with photographing this beauty was that as we had stepped out a little into the boggy area we had disturbed the infamous midges and they were flying all around our heads and were very unpleasant!! 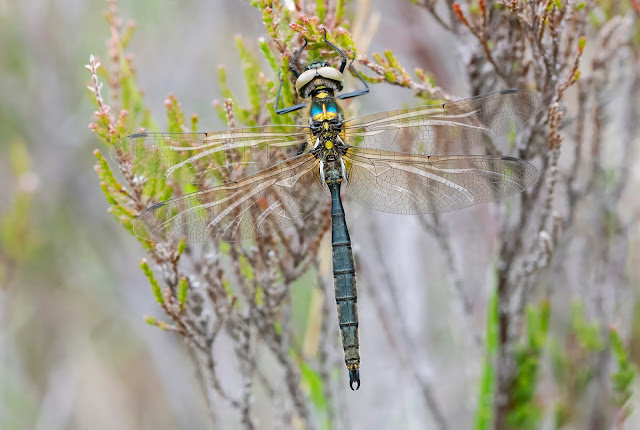 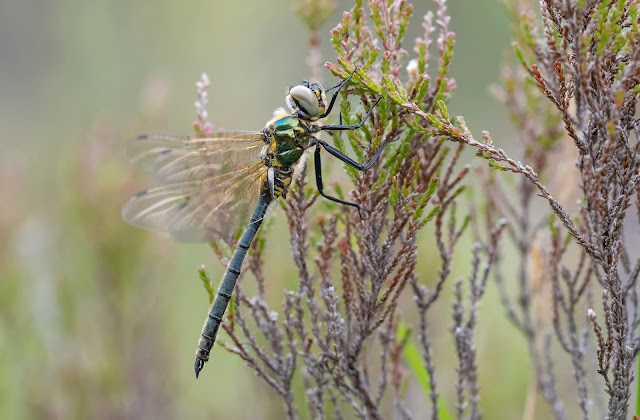 Teneral Male Northern Emerald.
After our successful 2 days in the Highlands we headed a little south to the Cairngorms where, once we had escaped from the Hotel of horrors and found a fabulous B & B we continued looking for more wildlife. The 2 remaining odonata species we were after I had seen before with Nigel, but as ever, it is always good after a few years to see them again. The Northern Damselflies that I saw on that visit were all tenerals so this time they would all be mature individuals. The weather we encountered now in the Cairngorms was very disappointing and it was generally cool, cloudy and drizzly and at times just awful. However, at least the damselflies were not too active. 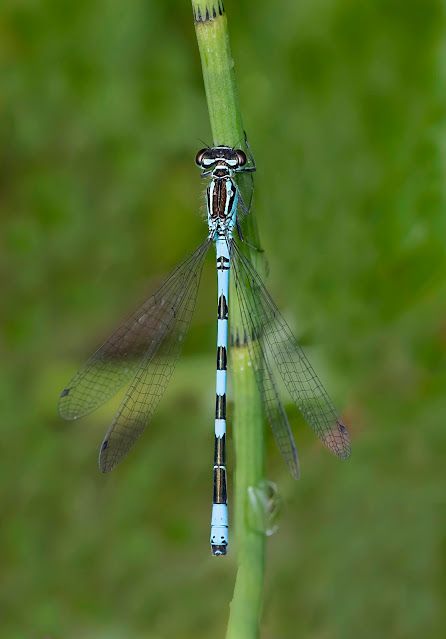 Male Northern Damselfly.
Nearby we had to wait for a small gap in the clouds to get the White-faced Darters flying. We only saw 4 or 5 which also included a mating pair. However, the gap in the clouds was very short lived and we didn't get any really good photos of them. As ever though, really good to see. 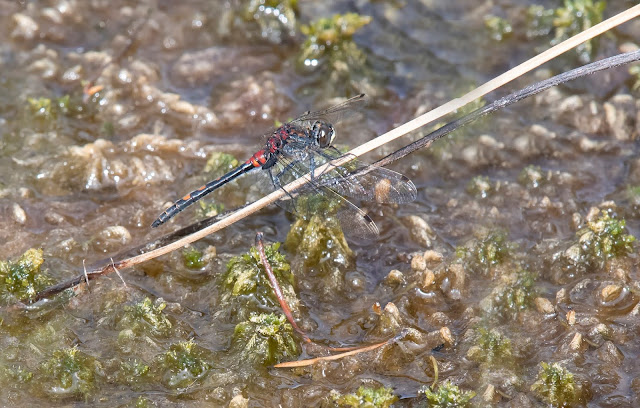 White-faced Darter over an acid pool. 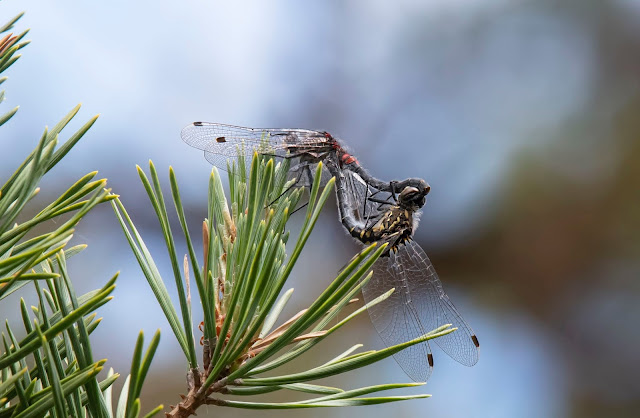 Posted by Bob Eade. at 10:05
Email ThisBlogThis!Share to TwitterShare to FacebookShare to Pinterest