One of my favourite challenges that I manage just the once most years is to photograph the Dark Green Fritillaries waking up on the South Downs.

The morning I chose was with the forecast predicting light winds and light cloud cover, which sounded ideal, so having set the alarm clock for 4.45am I woke full of anticipation.

Looking out the window I could see that quite a mist had set in, not so ideal, but I decided that as I was awake I may as well still go, but the conditions allowed a quick breakfast first.

The long climb up the hill was spectacular and as I reached the top the view was a little different than usual with the fog all along the river valley and well up the slopes too. 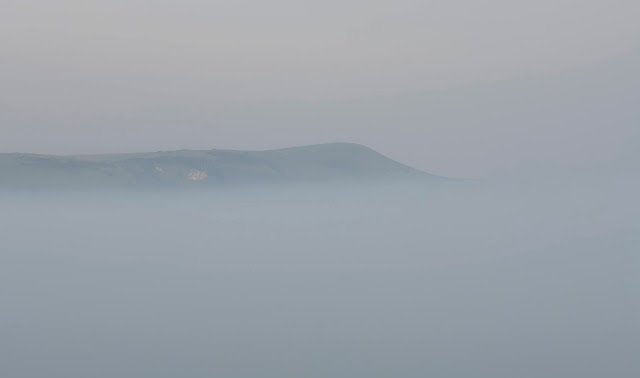 A Foggy Morning.
As I approached my chosen area I could see that the fog had already moved away from where I would be and I realised I only had a few minutes to find some roosting butterflies, so I quickly put the camera gear down and started the search. As it was I found 2 Dark Green Fritillaries very quickly and it was then a short wait for the light to improve a little to photograph their under-wings as they started to wake up. 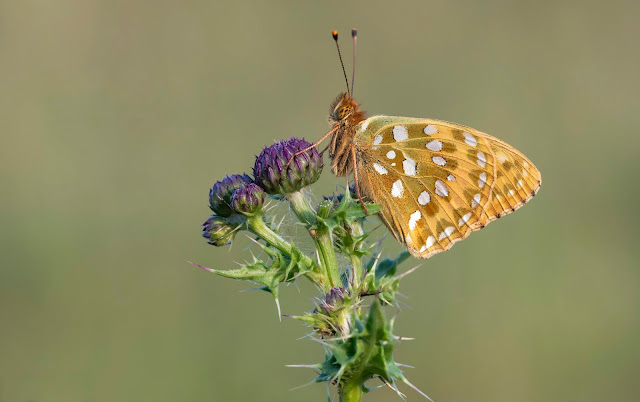 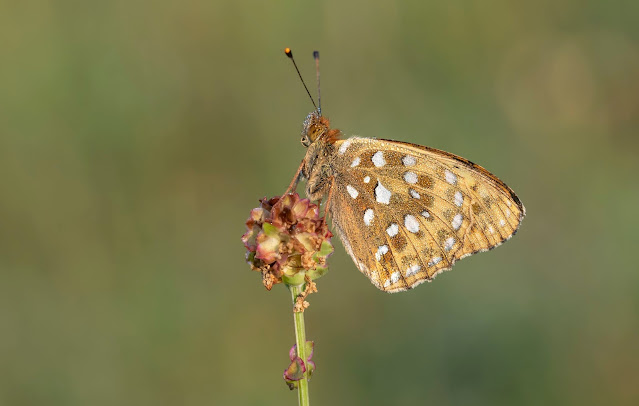 Male Dark Green Fritillary on Salad Burnet and covered in dew.
With the sun already reaching the butterflies they very soon started to open their wings, with the one on the thistle opening first. I was busy taking a few photos of that one when I just glanced at the other butterfly. It was at this moment that I nearly fell back in amazement as the 2nd butterfly was a superb aberrant form, the first Dark Green aberrant form I have ever seen. I very quickly moved to the 2nd butterfly to photograph this fantastic butterfly. Unfortunately, both butterflies were vibrating their wings trying to warm up which made photography very difficult as most of my photos ended up with 'wing shake'!! I didn't keep any of the standard butterfly with open wings, but fortunately I did get a couple of good shots of the aberrant one. The dew drops also showed up along the edge of the fore-wing. 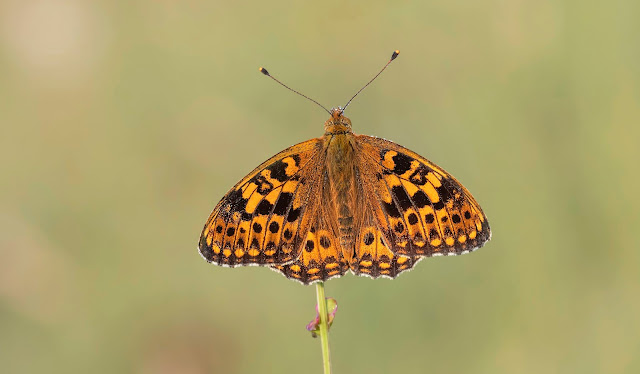 Male Dark Green Fritillary aberrant form cadmeis Lemp.
In just a matter of a couple of minutes both butterflies had flown and I then decided to see how many other Fritillaries were waking up. As it was very few appeared which just showed how lucky I had been finding the two so quickly. About 30 minutes later I spotted the aberrant butterfly again and I managed a couple of shots of it on the ground as it continued warming up for the day. By now it was still before 7am and plenty of butterflies were on the wing which included around 20 Dark Green Fritillaries, Meadow Brown, Marbled Whites and Small Skippers. 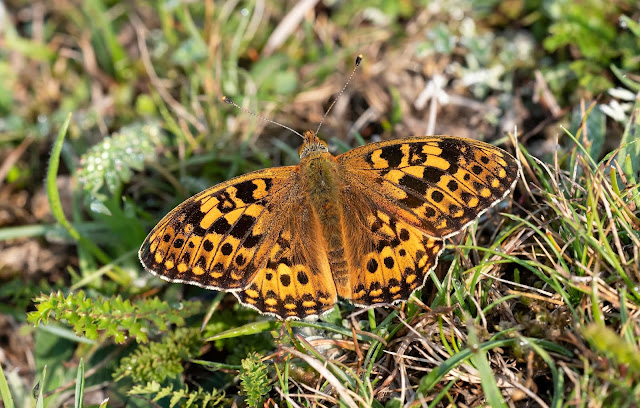 Male Dark Green Fritillary aberrant form cadmeis Lemp.
I then wandered around the hillside as I had planned to try to see if there were any Orange-tailed Clearwing in the area which would have to be much later in the morning. By now it had warmed up quite a bit and other insects were now on the wing. I also checked out some Mullein plants and found one spectacular Mullein moth larva. 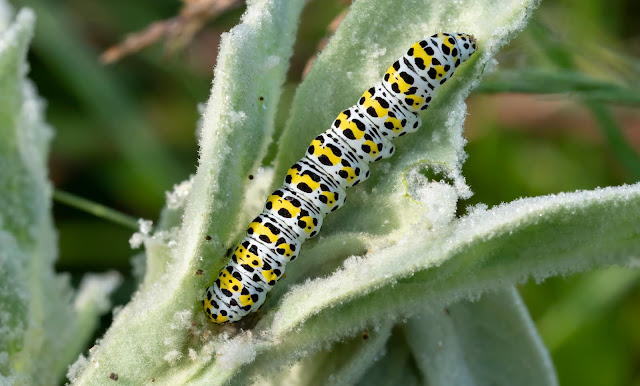 Mullein Moth larva on Mullein.
After seeing a wary Fox I started to work out the best places to try for the Clearwing, seeing as I went several Small Coppers and Small Heath. I then spotted my first Mecyna flavalis of the year. This is a very rare micro moth that is only found in a handful of sites, mainly in Wiltshire. Where they are found they are often very abundant, but extremely hard to get good photos of, so it was quite a surprise to find this newly emerged individual pose perfectly off the ground on a grass blade. This is by far my best shot of this species. 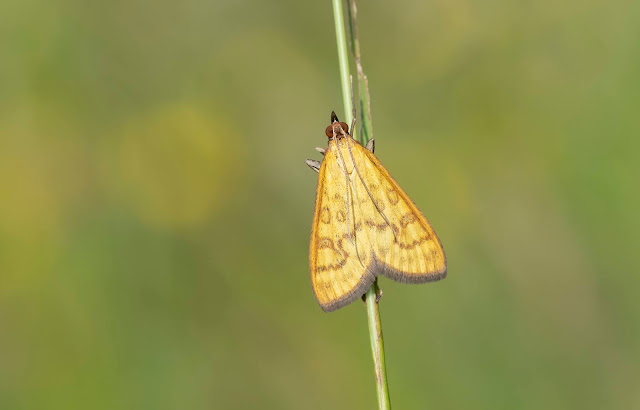 Mecyna flavalis.
Just after this I did get a Six-belted Clearwing which was not too much of a surprise as the area does have a lot of Bird's-foot Trefoil which the larvae of this species feeds on. 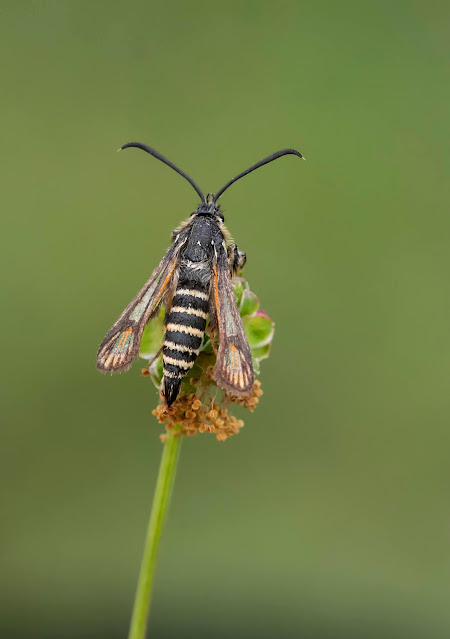 Six-belted Clearwing.
I was just about to start the hunt for the Orange-tailed Clearwing when the fog came back along the valley, this unfortunately cut short my morning, however, I was pretty worn out by then so it wasn't too much of a disappointment, especially as the session had been so successful and one I won't forget in a hurry!!
After arriving home I sent an image of the aberrant Dark Green Fritillary to Colin Pratt, the county butterfly recorder, and he informed me that it was a named aberrant form cadmeis Lemp.
Since the first record in the 1890s there had apparently only been another 6 records of this form so it was a very rare form!!