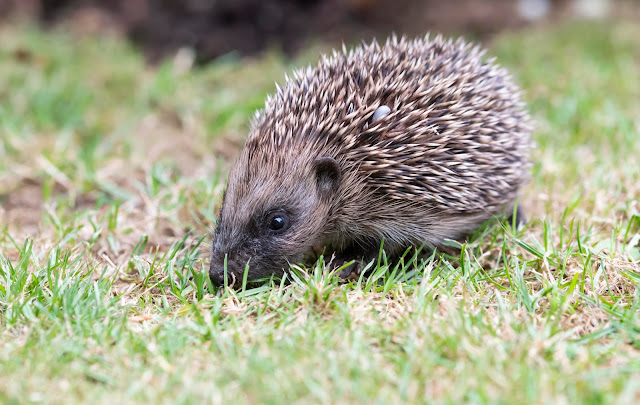 When we moved to our current house back in 2006 we often saw Hedgehogs in the garden, but then they seemed to vanish until a couple of years ago when the animals often nicked the cat food left out for Danny. Not that we minded at all as it was great to see them again in the garden.

This year in particular seems to have been good throughout the Summer with many sightings after dark, this included one sighting earlier in the Summer when there were 3 Hedgehogs together which I assume were 2 females and a male, with the male following one of the females closely whilst making grunting noises. After this it was hoping that we would eventually have the pitter-patter of tiny feet.

A couple of weeks ago I had a call from my neighbour as his dog was clawing and making a fuss at his decking and on checking that nothing was dead underneath he had opened up the decking to find a female Hedgehog and 3 Hoglets. The babies were actually suckling when he exposed them so he quickly covered them back up.

He then called me again the following day as the mother and one Hoglet was wandering around his garden mid morning. I nipped round and managed a few shots before the Mother had gone to the far side of the garden and the baby had gone back under the decking.

A few hours later the mother was seen carrying one of the babies away from his garden, across to my garden and probably to the decking in my other neighbours garden.

Wonderful to see these little gems and hopefully they will be successfully reared and one hopes the ticks attached to the Hoglet will not cause too many problems for it.