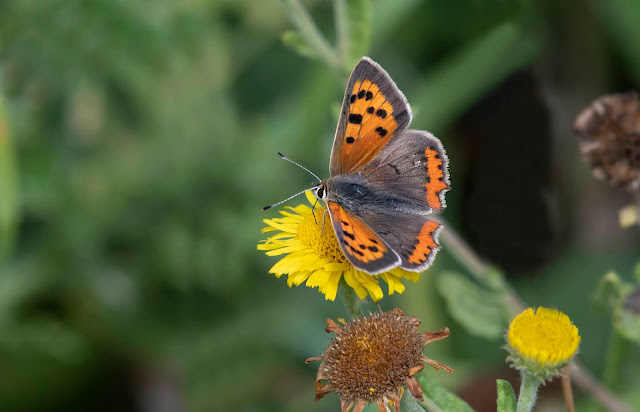 Yesterday I decided to have a quick look around Arlington Reservoir to see what butterflies are using the areas of Fleabane at the moment.

With a bit of a breeze blowing I did think it would probably be a total waste of time but there was just enough to keep the interest going with several very smart Small Coppers as well as two Clouded Yellows.  Of course of the two Clouded Yellows only one settled for a picture and it was the old tatty one and not the much fresher one!!

There was a similar story with a Brown Hawker, with a worn, and bent female Brown Hawker settling but all the better ones stayed on the wing.

Fortunately, the Small Copper that settled was a lovely individual.

I then wandered a little around the reservoir and noticed a very large bird flying low over the water. I quickly realised it was an Osprey that was just homing in on a fish. A few quick grab shots was all I managed, and they were pretty poor photos, but a record all the same.

Posted by Bob Eade. at 14:06
Email ThisBlogThis!Share to TwitterShare to FacebookShare to Pinterest