The Duke and Duchess of Kent.

Each year Nigel and I have an 'Old boys outing' to Kent to search for the Duke of Burgundy butterfly. The beauty of the Kent populations of this rare butterfly is that it is a woodland colony and the ancient woodland that the colony is in is also brilliant for other rare moths and orchids.

This year we were a week earlier than we had been in previous years but we knew that there was a risk that we would be too early for many of these other insects. We had however, also chosen a day that was cool and cloudy with a chance of warmer patches, but we thought it was a risk worth taking as being early in the season we would also have the place to ourselves.

As it was on arrival there was another photographer there, but he looked as though he was giving up. The weather certainly was cool and I was thinking we may have pushed our luck too much here when I suddenly had a male Duke fly up in front of me, only flying a couple of metres before landing again.

I called Nigel over and we both spent a few minutes photographing this rather nice male. At one point whilst I was photographing him Nigel spotted a very fresh female that was trying to warm up in the very weak sunshine. We now had 2 butterflies to concentrate on and one of each sex. With the temperature staying cool we both managed to take several shots of both butterflies as they flew short distances. We finally left the female after photographing her on some Hazel that was re-growing from some coppicing that had been done over the Winter.

The Duke of Burgundy is the only European butterfly in the Riodinidae family and one of the unusual things concerning this species is that the male has 4 active legs, with the front 2 being very small, whilst the female has all 6 legs active. This can be a way of working out the sex of the butterfly with a good clear side view. The final photo here of the side view of the female shows the 6 legs quite clearly, as well as the much broader abdomen and more rounded wings of the female. 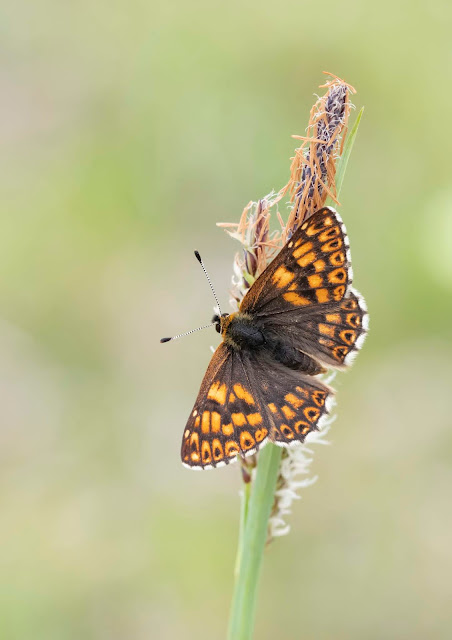 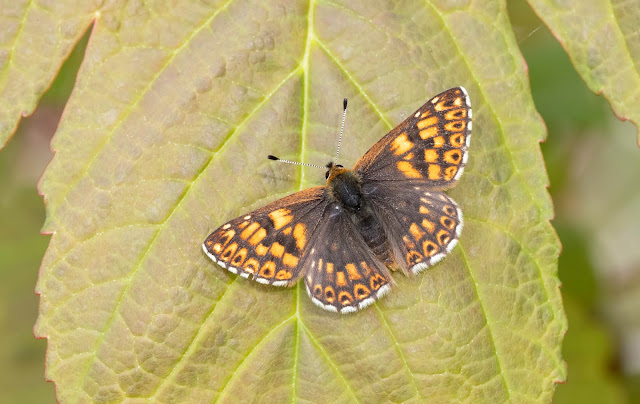 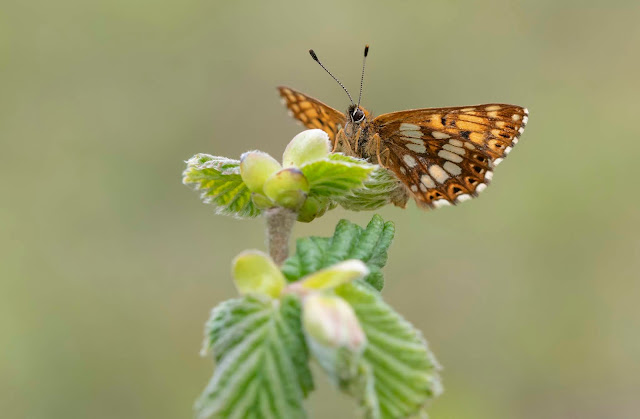 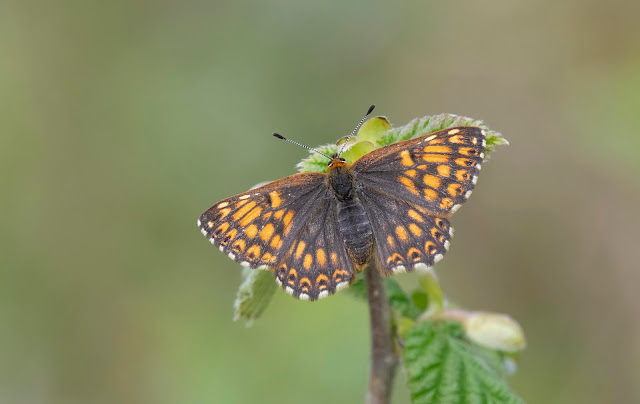 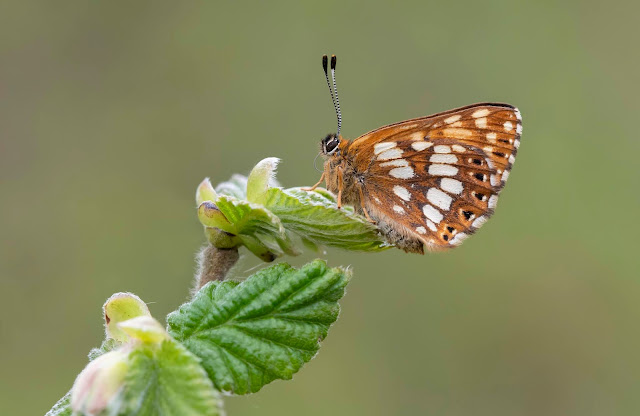 Female Duke of Burgundy on Hazel.

Following our success with these little beauties we spent a short while looking for other insects, but we were not lucky with anything scarce, we didn't even see other Duke of Burgundy either. Our hoped for sighting of the stunning micro moth Anania funebris also didn't happen this year.

Most of the Lady Orchids were not yet in flower, although I did find one that was just about fully open. 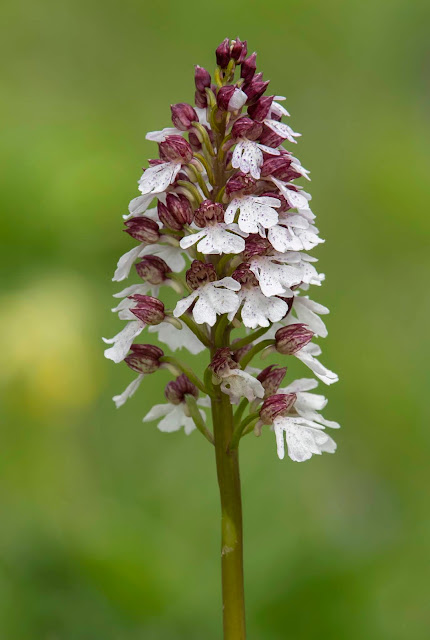 We then moved onto another site which is a Kent favourite for me to search for more Orchids. This is a site that I have been visiting for around 40 years. I had heard a rumour that a rare form of Fly Orchid had been seen last year so we hunted for a while for this, but alas, it seems we were too early for this too. We made a pledge to make another visit in a couple of weeks when hopefully the Green Fly would be in flower. (That will be the next blog post)!!
There were quite a few normal Fly Orchids showing and the Lady Orchids were more advanced here too. However, one of the best things we saw here were 4 Turtle Doves that we heard calling as soon as we had parked the car. They were grouped together in a large tree above the layby.

We also both saw our first Herb-paris, a rare plant that grows here. 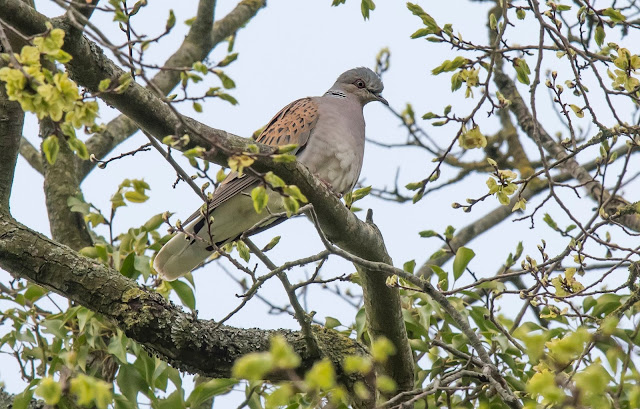 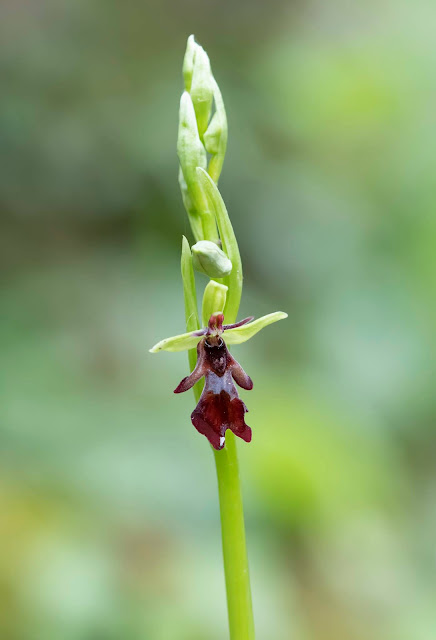 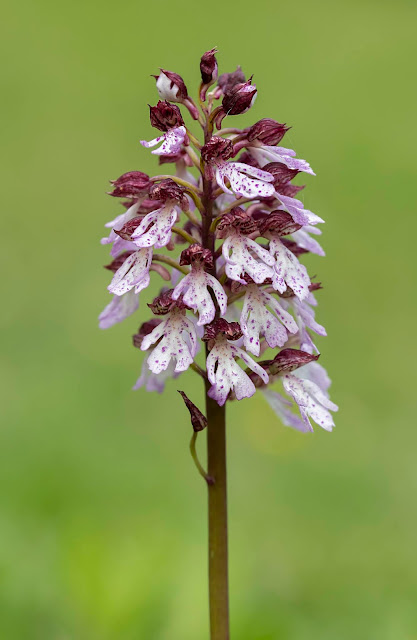 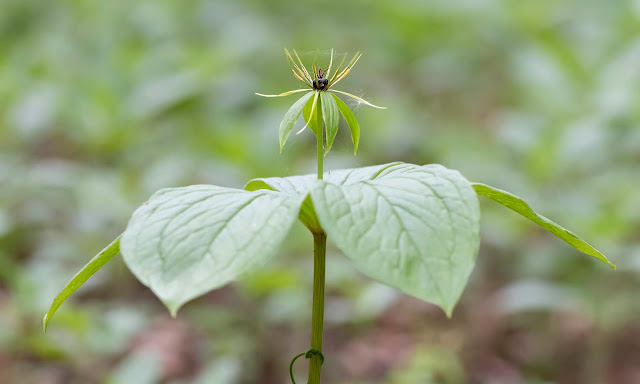 As ever, our annual Kent trip had been a brilliant success and we looked forward to our swift return to hunt out the Green Fly Orchid.

Posted by Bob Eade. at 17:19
Email ThisBlogThis!Share to TwitterShare to FacebookShare to Pinterest