The Blues Turn To Yellow.

With an unconfirmed report of a Long-tailed Blue after I had departed on Friday it was a case of another trip to Tide Mills for a bit of a butterfly hunt. On arrival it was clear the Shrike was still performing with more birders making the trip to Sussex on a fine day. A wide berth around them looking in the areas where the Long-tailed had shown in the past proved fruitless. I then saw James at a distance on his knees, so I wandered over in his direction as it was obvious he had found something worth photographing. As it was it was a very fresh male Clouded Yellow trying to warm up in the sun. It flew very short distances as it was still quite cool conditions that gave us the chance to get a few decent shots. This is a sign that the eggs that the Clouded Yellows that arrived a few weeks ago laid are now completing their cycle. 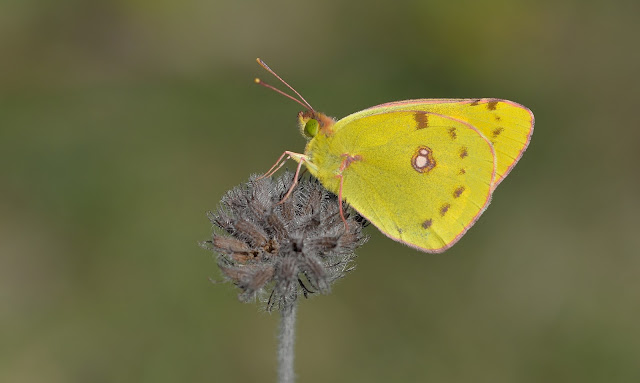 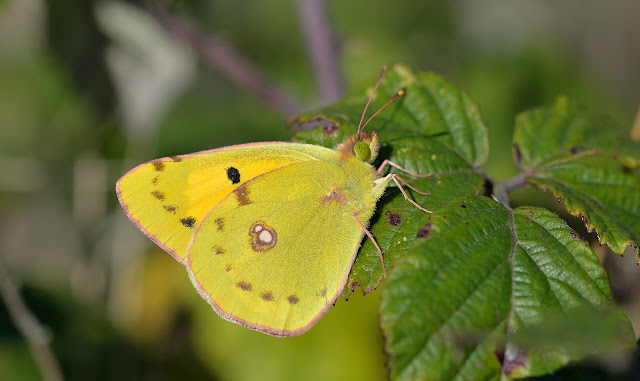 As it warmed up further the butterfly was soon into true flying mode and it headed off. We then patrolled an area that was sheltered from the cool breeze. This gradually brought us towards the Shrike and the birders. The bird then seemed to come and greet us, perhaps it knows us by now!! We watched it for a short while before carrying on the search. Someone then said the Shrike had caught a Lizard. It was sitting in the middle of a bush quite near me and I was the only one in the right place to get a shot. Although the twigs were all over the place I managed to get a couple of quick shots off before the bird flew into an even thicker bush to store the Lizard in true Shrike behaviour. 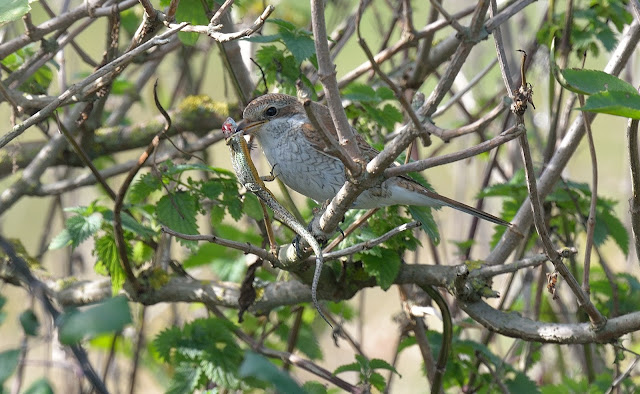 The following day it appears that the Shrike has at long last continued its migration South as it failed to show at all on the Monday.

Posted by Bob Eade. at 10:37
Email ThisBlogThis!Share to TwitterShare to FacebookShare to Pinterest