Bedtime for a Beautiful Female.

Way back in the 1970s and 80s nearly all female Common Blues were brown with orange markings around the wing, very much like a larger Brown Argus. If they had blue on the wings they were thought of as an aberrant form. Nowadays the blue ones are normal and ones missing blue is the unusual form!! In the last 2 years I think I have only seen 2 which would have been the normal form from way back.
Yesterday evening I called up the hill to see if I could find some Common Blues slowing down as the sun got lower. Unfortunately the stiff breeze was still evident but on arrival I saw a beautiful female Common Blue with wings wide open as she tried to gather the last warmth from the sun. This female was very much todays normal female with lots of blue showing. Although she flew a couple of times as the wind disturbed her I did get a few pleasing photos of her. By the time I finished she was settling down to bed!! By then the males that I saw were also well into roosting mode. 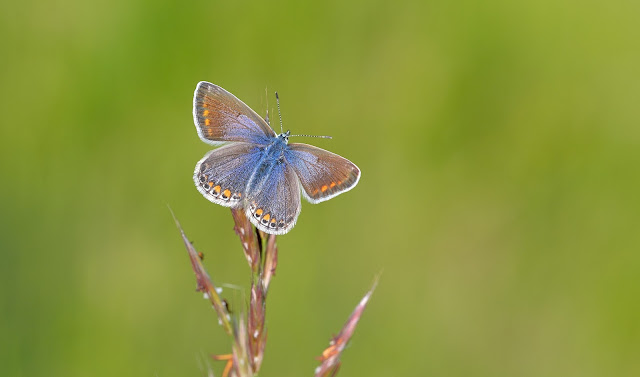 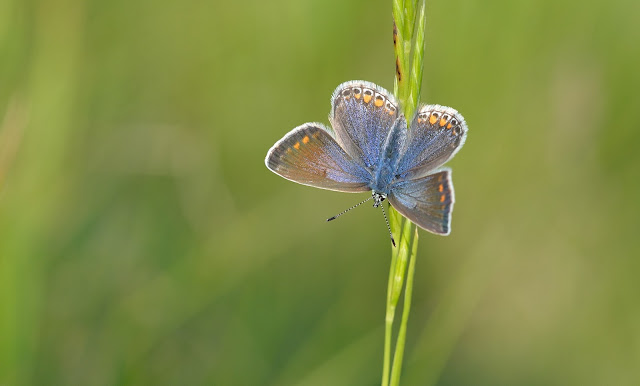 Posted by Bob Eade. at 18:58
Email ThisBlogThis!Share to TwitterShare to FacebookShare to Pinterest