A Fine Few Days and a Sussex Record.

Last Sunday I had a great day out with Lisa starting with searching for Adonis Blue in West Sussex. As usual when I am with someone else I tend to concentrate on finding interesting things to see rather than to actually photograph them myself, although I was tempted with a Hornet Robberfly that had caught a male Adonis Blue, as well as a rather nice Autumn Lady's-tresses. 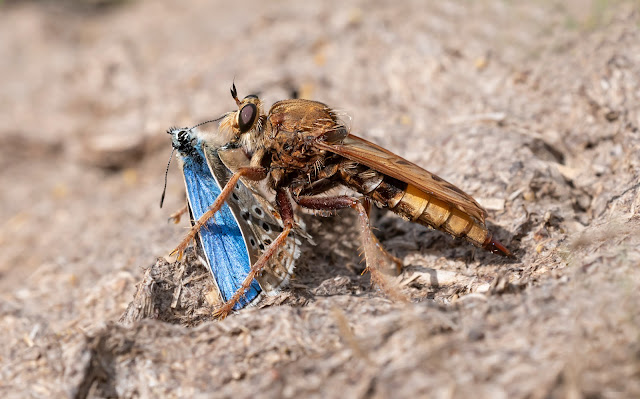 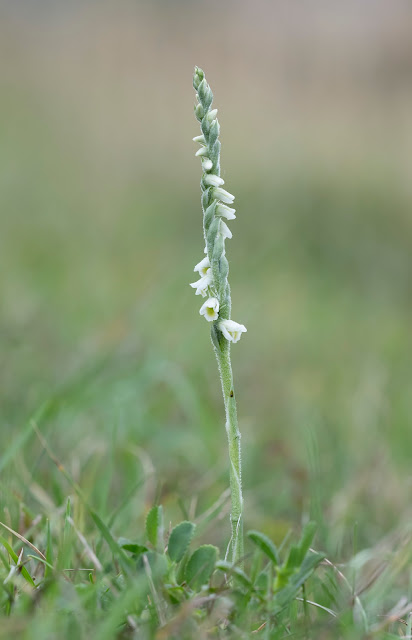 Autumn Lady's-tresses.
We then went further into West Sussex hoping for a Brown Hairstreak, but at this point our luck ran out although it was still a great walk followed by a short search for Willow Emerald which was slightly more successful.
The following day Lisa was meeting a friend in the afternoon near to me so I took her to my local patch hoping to show her my colony of Lace Border. As it happened we didn't have to look for very long as one appeared almost straight away. We then saw five in total, this has been my largest count this year here. I was also able to show her a beautiful Wasp Spider. Both these two species were new to her as the Hornet Robberfly had been the day before. We also saw several fresh Wall Brown, these followed my first 3rd brood Wall Brown of 2022 from last Wednesday. Both 2nd and 3rd brood are currently on the wing although very few tatty 2nd brood are now left.
After Lisa had left to meet her friend I strolled further along the valley where yet another mating pair of Hornet Robberfly gave me some photo opportunities. It can't be a very pleasant experience for the female having the male holding her on the eye with those sharp claws!! Before this year I had never seen mating Hornet Robberflies, I've now seen them mating 4 times in the last 2 weeks or so. 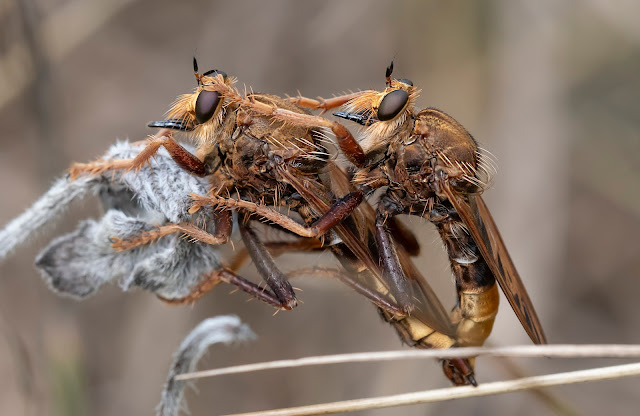 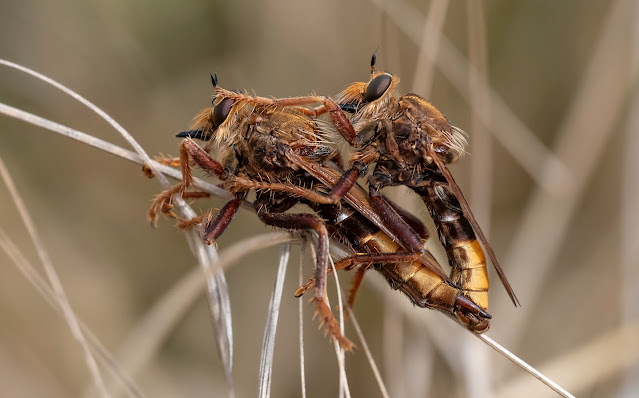 OUCH.
Mating Hornet Robberflies.
On Wednesday I headed to the other Sussex Lace Border site as the weather was not good for a local walk with the wind being a North Easterly. Having found 5 on my local site with Lisa I thought I had a chance to beat that total as the other site is less vulnerable and probably more suitable for the species. However, I certainly wasn't expecting to see so many of this very rare moth. My final total of 28 seen that day is a Sussex record count by a country mile according to the Sussex county moth recorder.
Until I found the first one on my patch on the 14th July 2020 there had only been 4 other Sussex records since the 1970s so sightings averaged at one every ten years so 28 would be 280 years worth seen in just over an hour!! 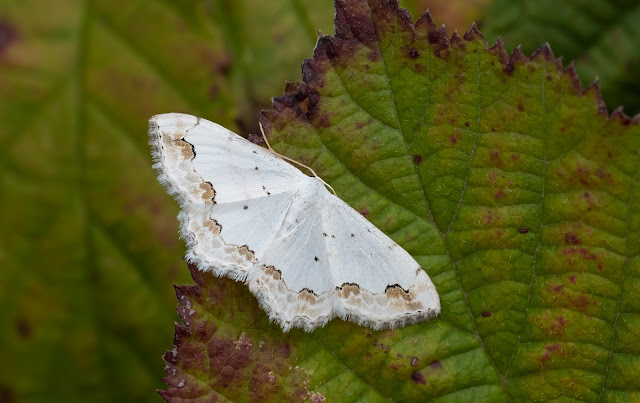 One of the 28 Lace Border seen.

Posted by Bob Eade. at 16:05
Email ThisBlogThis!Share to TwitterShare to FacebookShare to Pinterest