Back in the Meadow.

After the long walk up and back down the mountain I was itching to get back into the meadow. Once again the sun was beginning to leave the meadow so some of the butterflies were beginning to slow down for the end of the day. It wasn't long before I found what was to become my favourite butterfly of the trip to Transylvania in the form of a Purple-edged Copper. When I first spotted this beauty it was even on Ragged Robin which showed off its beauty. 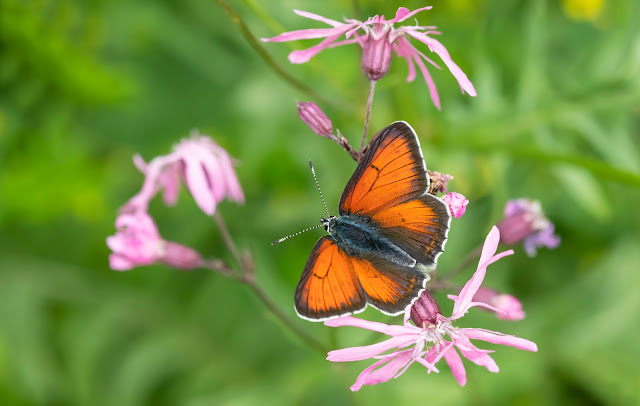 Purple-edged Copper on Ragged Robin.
I followed this beauty around for a while until it went to roost on a tall plant, but before it went to roost it spread its wings quite wide to soak up the last of the warmth of the day and in doing so gave me my favourite shots. 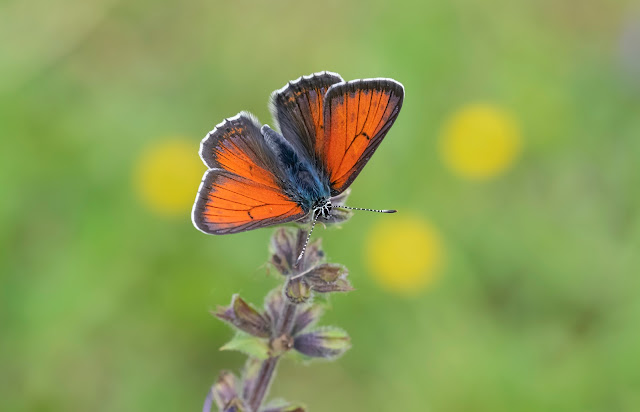 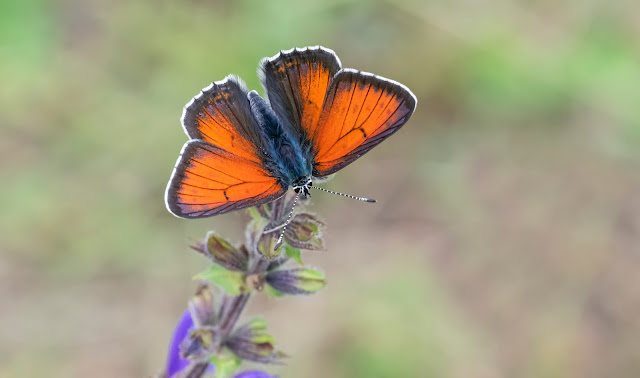 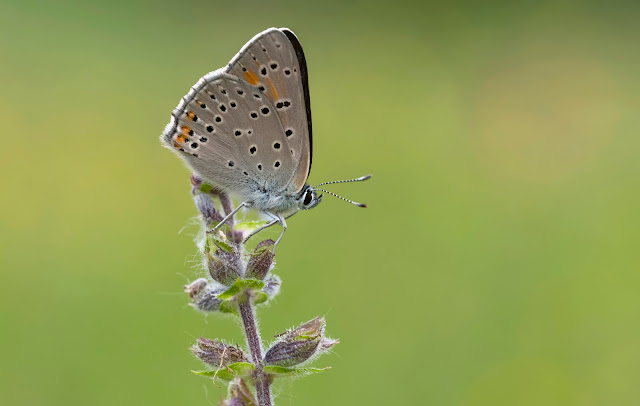 Purple-edged Copper.
I left the butterfly in situ thinking I could photograph it the following morning as it wakes up.
Just a few metres later I came across my only Marsh Fritillary of the trip. This stunner had more markings on the under-wing than the British Marsh Fritillary. By now the sun had gone from the meadow so all I saw was the under-wing, and I was hoping to see it once again as it woke up the following morning so I could see the top wings. 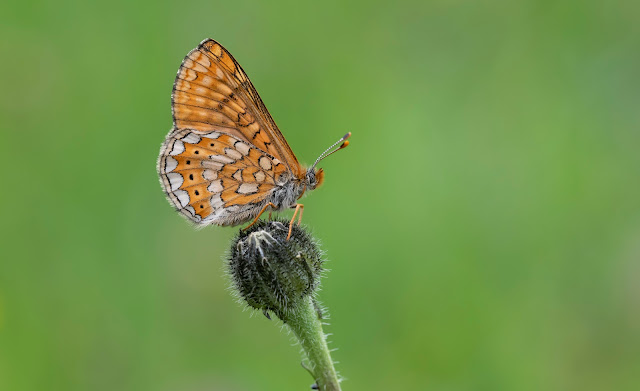 Marsh Fritillary.
I couldn't believe how well the evening was going, and it still wasn't finished yet as a short distance later gave me a fresh Heath Fritillary. 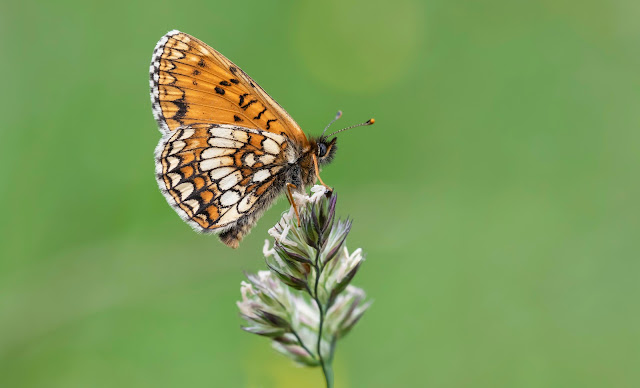 Heath Fritillary.
I also managed some of my best shots of the glorious Black-veined Moth, which I will post later. As Chris and Anna had heated up the hot tub, and I had already spent a couple of hours in the meadow I decided I had better head back, but not before I had found several Small Pearl-bordered Fritillaries roosting close together. One even had open wings despite the time. 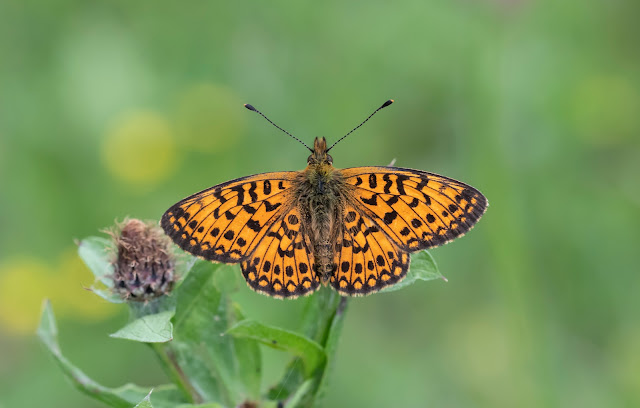 Small Pearl-bordered Fritillary.
The next morning I headed out quite early hoping to find the Purple-edged Copper and Marsh Fritillary still in situ but unfortunately they were nowhere to be seen. I had seen a walker in the meadow the previous evening with lots of dogs so they may have disturbed them, or because it had been a very cold night the butterflies may have descended into the deep foliage. Whichever, I never did see the open wings of the Marsh Fritillary. A little disappointed I moved on and was rewarded when I found a female Large Copper at roost. It was then a case of waiting for the sun to get higher to encourage her to open up. 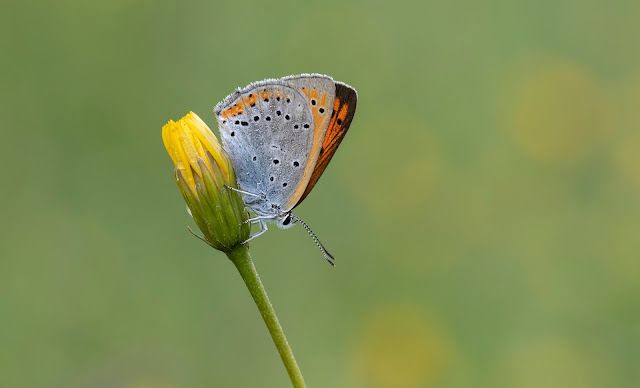 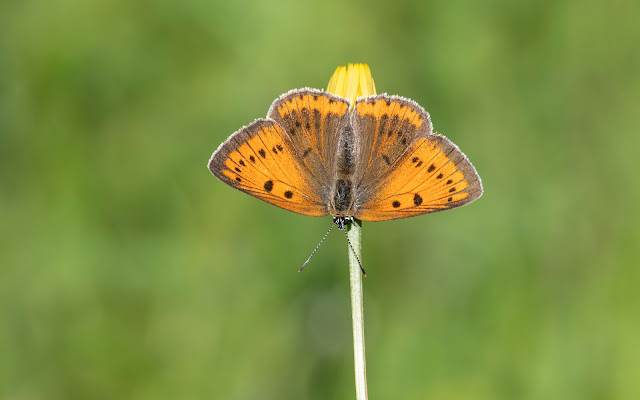 Female Large Copper opening up.
It was a long wait but eventually she did the decent thing and opened wide for me. A real beauty and one of three Large Coppers seen during the trip.
With our time at this spot coming to an end I was a bit more limited for time but just as was heading towards the cabin I saw my only Map of the trip. In fact this was my first ever Map. 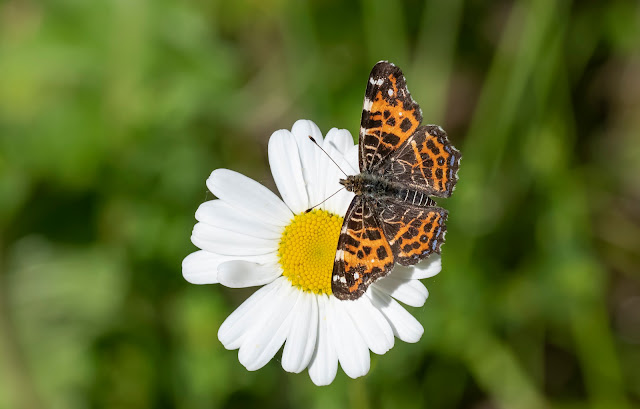 Map.
Just after photographing the Map a Swallowtail flew over me, but unfortunately it kept going!! Then after packing up to go we were admiring the view to the mountain from the balcony again when Chris spotted a large butterfly flying around the cabin below us. With the binoculars I spotted that it was a Camberwell Beauty. We also had a probable White Admiral and a possible Hungarian Glider fly around the cabin. Such a special area that also held a few spectacular moths that will be next.

Posted by Bob Eade. at 11:12
Email ThisBlogThis!Share to TwitterShare to FacebookShare to Pinterest