For many years I have tried and failed to photograph hunting Owls, mainly Short-eared and Barn.  This has meant many hours spent in the freezing cold and coming home with at best, only reasonable images.  Eventually I knew that if I kept persevering the day would come when I managed to improve on those poor results from the past.

After failing again at a site I found just over a week ago, when I saw a hunting Barn Owl in perfect light, but as I was driving Pen back from the hospice I didn't have a camera with me.  The following day I went equipped but the Owl decided not to appear!!

Since then there has only been two days when the weather was good enough to try,  this time I relented and went back to a site that I have tried a couple of times this year as here there are both a Barn Owl and Short-eared Owls showing well.

Even arriving at 2pm I had been beaten by 3 others that had the same idea, although the others were not able to see the Barn Owl that was sitting on a post already as it was hidden from them by a bush.  The Owl soon flew and after a couple of circuits vanished for what turned out to be over 2 hours.

Meanwhile the 2 Short-eared Owls were also showing, with one on another post and one in the long grass.  The one on the post soon flew, with the grounded bird sitting tight for well over an hour.

Other photographers came and went as the action was virtually non-existent, but eventually the Barn Owl appeared again hunting over the meadow.  It wasn't long before the bird made its way towards where I was hidden and the camera at last saw some action.

There was still plenty of mixed success with the bird keeping out of range for much of the time, however, at one point it located a Vole quite close to me and it was seen hovering above the long grass for several seconds before it pounced on the Vole.  I then saw the bird transfer its capture from its talons to its bill where it swallowed the Vole at the 2nd attempt.

Just after it took off I was following it in the camera screen when I suddenly saw the shape of a Short-eared Owl move past the Barn Owl.  I just had time to move the camera and re-focus to get a few shots of the Shortie.

After several more views of the Owls I eventually decided the light was going so I decided it was time to leave.  I was quite surprised to find I was the only one still there.  It had certainly been a great afternoon with great views of all the Owls as well as a pair of Peregrines that had been displaying nearby too.

A further attempt a few days later resulted in just one view of a Short-eared Owl and a blank for the Barn Owl. 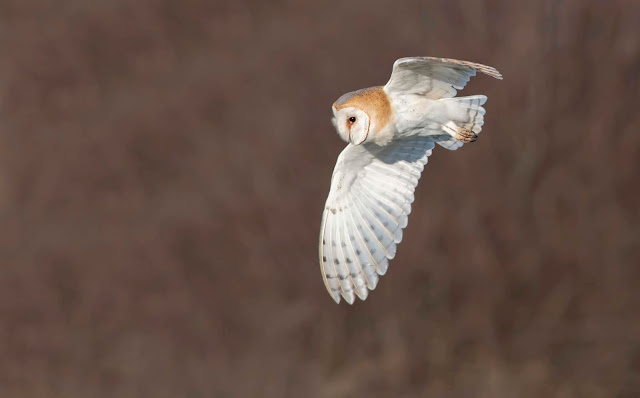 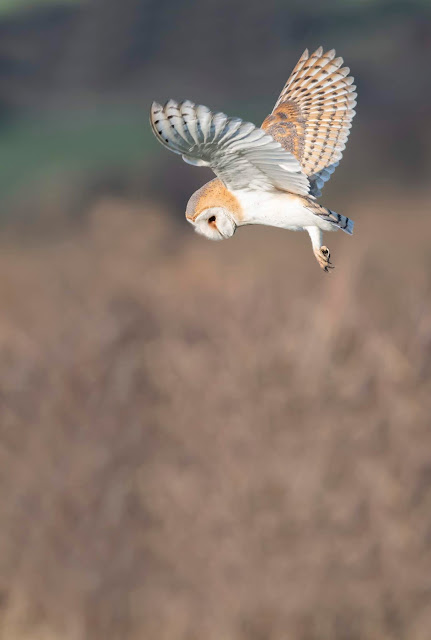 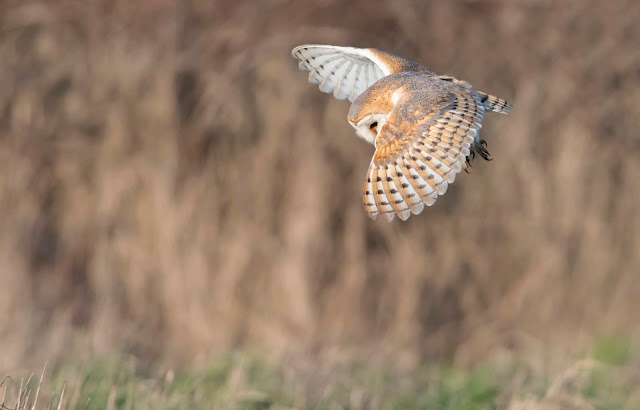 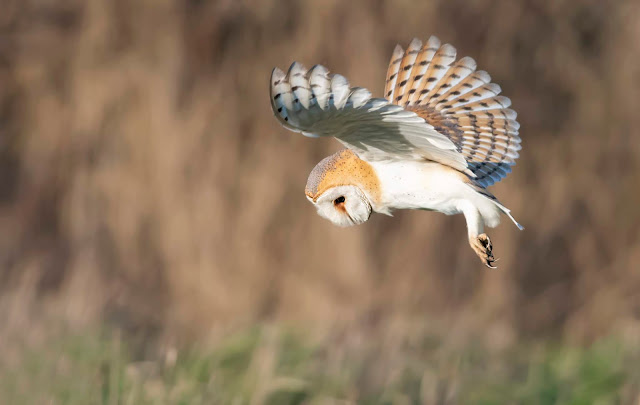 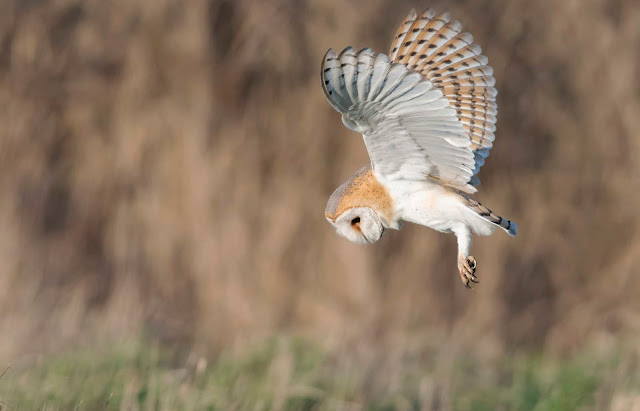 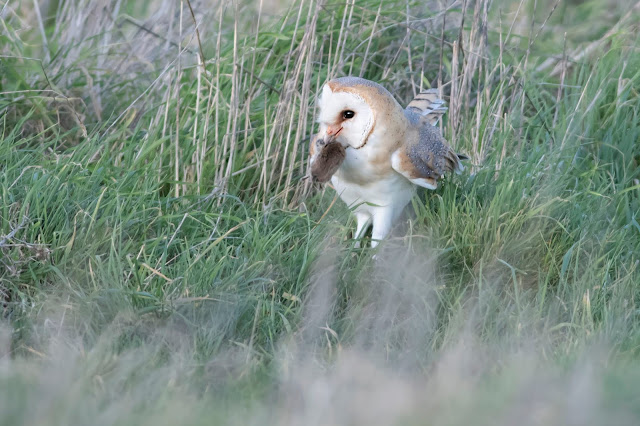 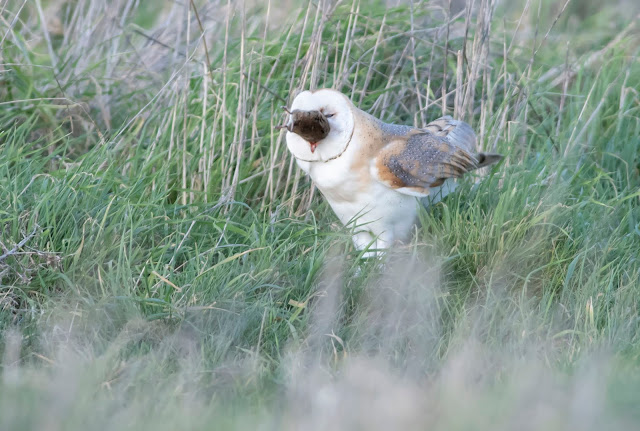 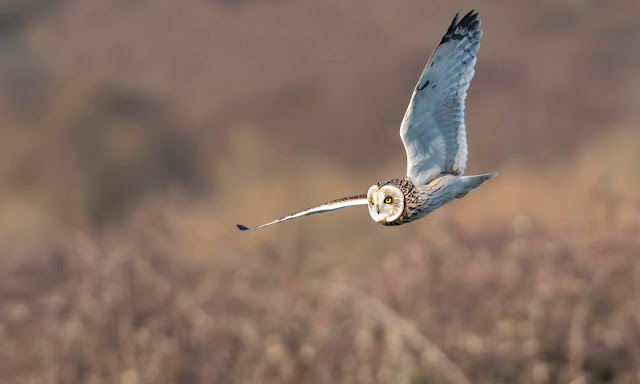 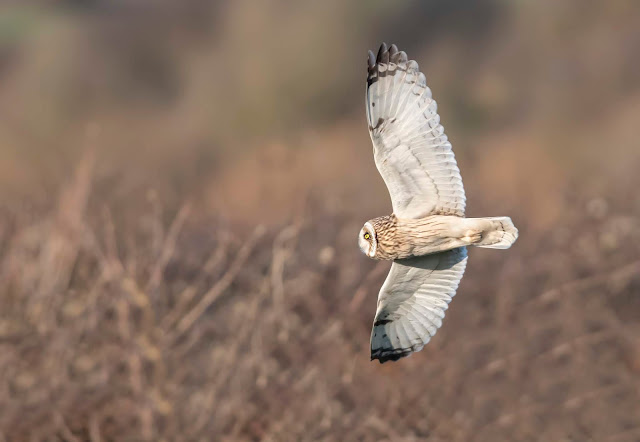 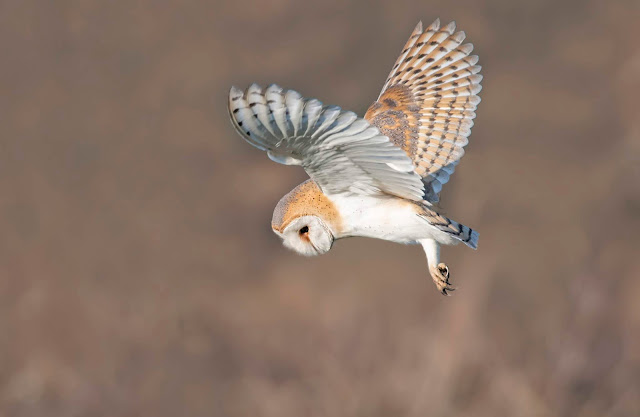