With the weather being pretty dull and me feeling very unenthusiastic I had 2 walks this past weekend leaving the cameras behind. I was just not in the mood for lugging it all about when I was unlikely to see anything.

The Saturday walk of around 7 miles was as expected, not a lot to shout about, although a dozen or so Wall Brown were nice along with several Speckled Wood, Red Admiral, Small White and singles of Common Blue, Peacock and Comma before the rain hit me a mile from home. The Comma did pose very nicely and a photo from the phone of that was just about worthwhile. Not a bad quantity of butterflies for a mid October day. 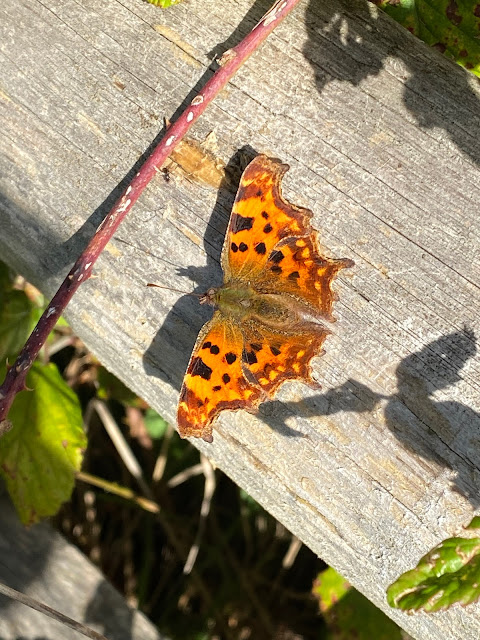 Comma
The following day it was a slightly different route, although still walking from home. Once again a bit of rain hit me during the walk but at least this time I had a waterproof coat!!
I was just over a mile from home when I had one of those magical moments. I saw a Rabbit not far away, but something seemed slightly odd. Looking through the binoculars I could see there was a Stoat with the Rabbit and the Rabbit was no longer alive. I do not know if the Stoat came across the Rabbit or whether it had caught it itself. However, the Stoat is well up there with my favourite mammals but I have never managed to photograph one and here I am watching a Stoat trying to move the dead Rabbit into cover and I have no camera with me!! I did however have the phone but that would mean getting close to get any kind of image. Fortunately there was some cover between us in the form of some nettles and I crept up behind these. The Stoat did actually see me several times but the temptation of the tasty Rabbit was too much for it and it kept coming back to try to move it to cover. If I had the camera I wouldn't have seen so much action as it would have heard the shutter going off. Eventually I tried a movie sequence on the phone and managed just over a minute of action that once again I wouldn't have got with the camera. However, it was a shame the quality with the phone photos wasn't that good, but better than nothing!! 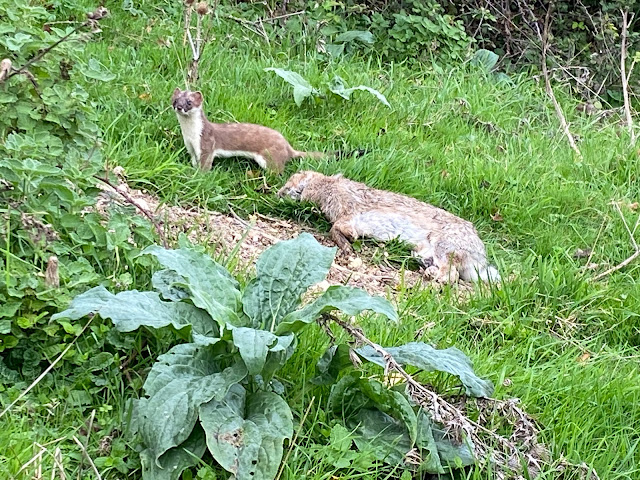 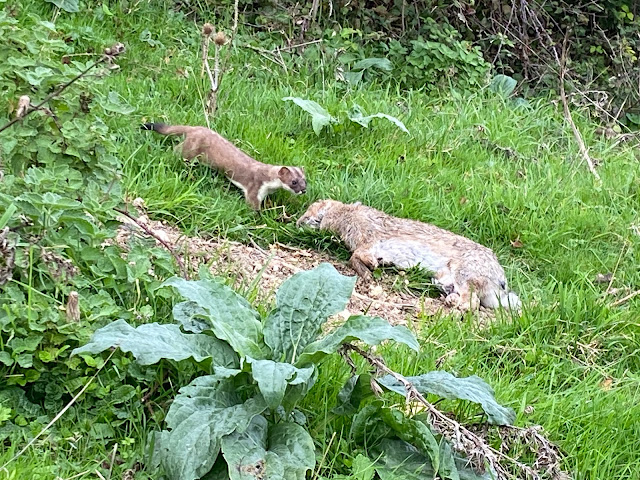 Stoat with Rabbit.
I must confess I never thought I would be loading phone photos onto my blog!!

Posted by Bob Eade. at 11:09
Email ThisBlogThis!Share to TwitterShare to FacebookShare to Pinterest