Back in 2020 I spotted a rare Lace Border moth on a part of my local patch. As it turned out, it was only the 4th Sussex sighting of this rare moth since the 1970s.

Having checked out the lifecycle of the moth I decided to spend a little time in the area when the moth was normally on the wing the following year just in case it was a mated female that had flown across from the continent, especially as there is plenty of the foodplant that the species uses on and around the site, namely, Wild Thyme and Marjoram.

My first visit resulted in only a possible sighting as I saw a small white moth that flew and then landed under a leaf. All I could see was a tiny part of the underneath of the fore-wing. Trying to get a better view the moth flew away and couldn't be re-located. I also saw a Mullein Wave that is also white and a similar size, so I was not convinced the moth I had seen was the Lace Border.

The following day I went again and spent more time to try and establish if I had seen another Lace Border or not. This time I had a much better result as I had 4 different sightings which were without doubt this rare moth. At one time I had 2 flying together, so this was the proof I needed. I also got 2 different moths photographed with the markings showing 2 different individuals. Of the 4 sightings I am sure there were at least 3 moths and probably 4.

This however, was enough to get the Sussex Moth Recorder very excited as there had been no evidence of the moth breeding in Sussex since way back in the 1950s until now!!

The 2 record shots achieved that day. 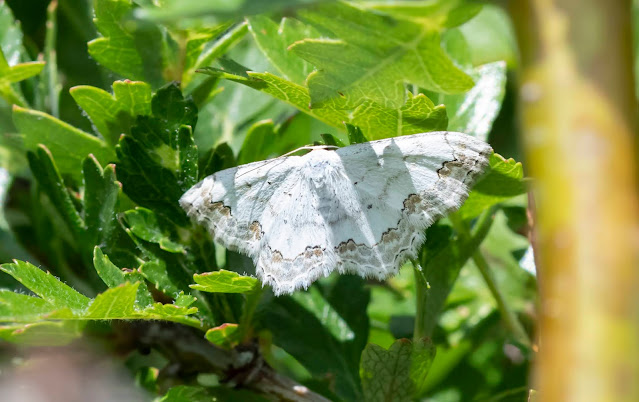 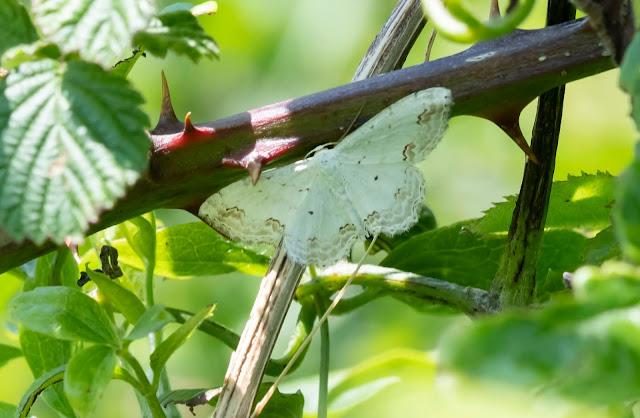 Lace Border.
Having only achieving a poor record shot photo in 2020 and 2 poor record shots in 2021 I was now really hoping to get a much better photo.
The next day I was back on site extremely early, just as dawn was breaking, hoping to find some before they became too active. As it was I could have had a lay in as the moths were in no hurry to wake up at all. 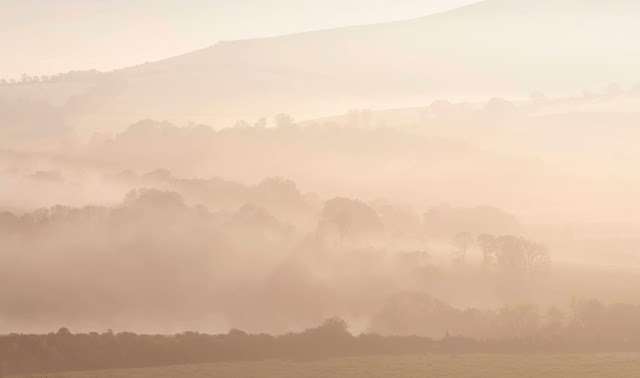 Very early morning!!
It wasn't until 8am before I saw any of them flying, and once again it was 2 flying together. It was still quite a bit more time before I found one that I could at last get a reasonable photo of though. In all the time I spent that morning it was once again, probably 4 different moths. Obviously some may have been the same individuals as the day before but I had probably in the two days seen more Sussex Lace Borders than anyone else alive today, including of course, the one I saw last year. 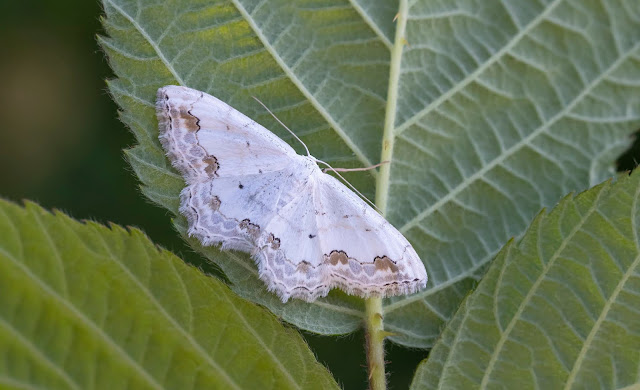 Lace Border hiding under a leaf.
Of course, as always, there are many other delights to see when searching for a particular species and there were also a couple of new species to me over the 3 days I was trying, including the Mullein Wave. I also came across a large Grass Snake that was basking in the morning sun, and after finishing searching for the Lace Border I carried on walking and came across a very obliging female Wall Brown and a few Alabonia geoffrella that James had found a few days earlier. 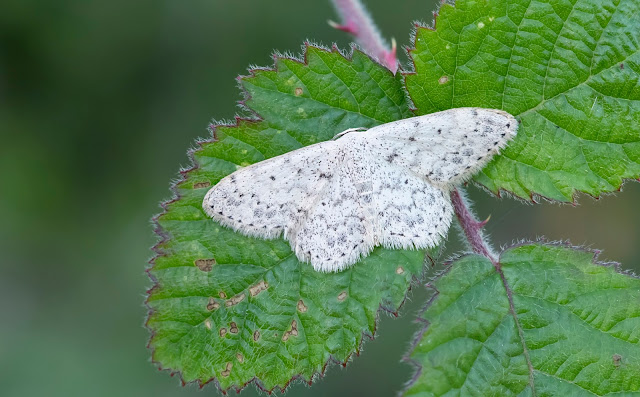 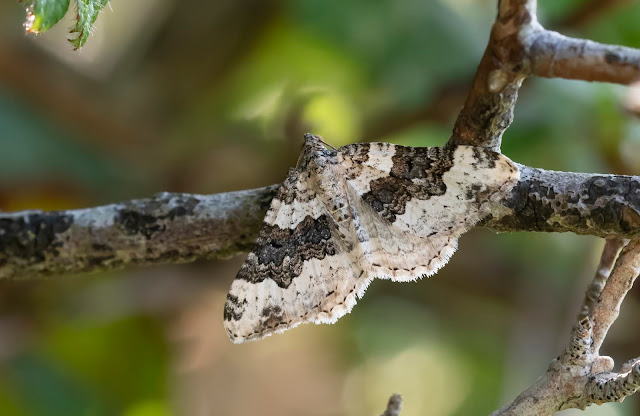 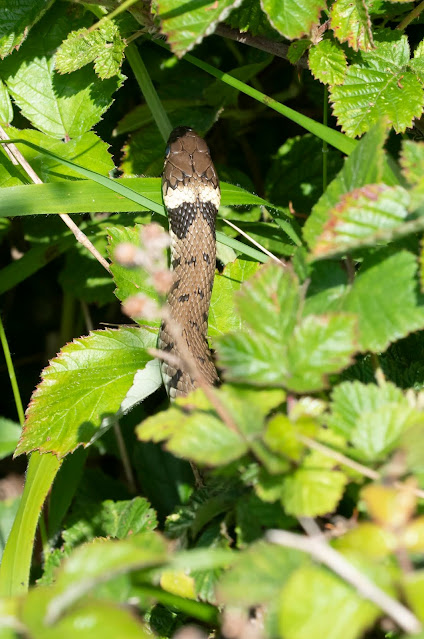 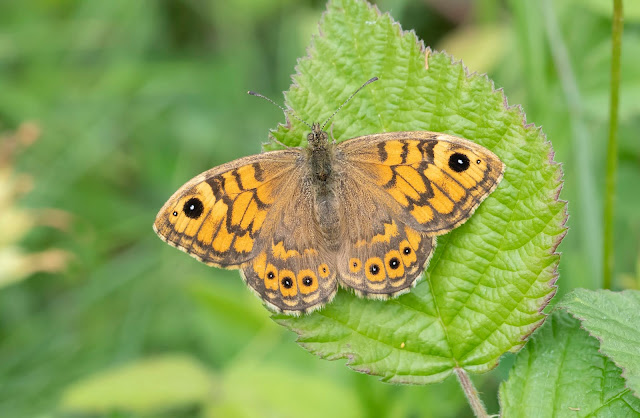 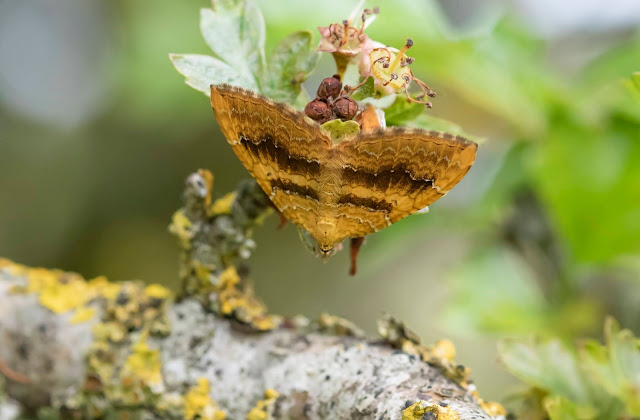 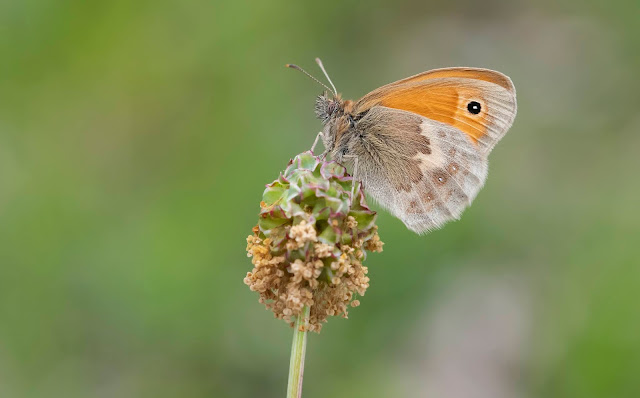 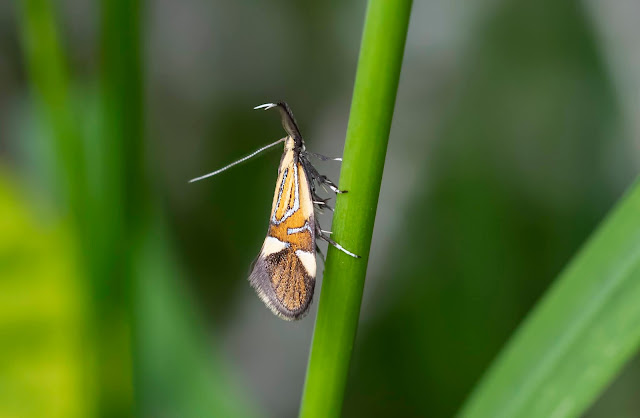 Alabonia geoffrella. (Common Tubic).
A few days later I heard from James that he had also come across one of the Lace Borders in the area and the great news was that this one appeared to be egg laying. Hopefully the colony will expand and enjoy its new home!!
Yet another Lace Border was also seen further East along the coast. Does this mean a few came across last year and more than one colony is now in the area. There are some very interesting things happening in the insect World that maybe climate change is responsible for.

Posted by Bob Eade. at 10:20
Email ThisBlogThis!Share to TwitterShare to FacebookShare to Pinterest