The Sparrowhawk and the Rabbit and a Hen Harrier.

A stroll from home this afternoon was more than a little entertaining. After a couple of miles I was walking down the edge of a hedgerow when I decided the light was beginning to fade so I changed from the 1.7 converter to the 1.4. As I was doing this I saw a Sparrowhawk flying low and fast down the other side of the hedge. A few minutes later I saw the bird perched up on the edge of the hedge on my side. I thought I would try to creep up on it but as usual it flew almost straight away and I thought that would be the end of that. However, when I was just about to reach the end of the hedgerow I heard a lot of screeching and saw a Rabbit panicking and running into some bramble with the Sparrowhawk flying above it. I'm not sure if it was the bird or the Rabbit that was making the noise but it certainly seemed that the Sparrowhawk was after the Rabbit. The Sparrowhawk then perched up on a fence post and kept looking down amongst the brambles. I tried to creep a bit closer and at one point the bird flew a couple of fence posts along, but I still managed to get a little closer as the bird was still concentrating on its target. I then hit luck as the bird flew back to the original post nearer to where I now was. It was still looking down at where the Rabbit went in. Of course it is possible a small bird also flew into the bramble and that was really what the Sparrowhawk was after although it really did appear that it was indeed the Rabbit it was after!! Also once the Sparrowhawk had flown I did check the brambles and no small birds came out.
After getting 16 photos the Hawk gave up and flew away. A very memorable experience!! If only the light had been better!! 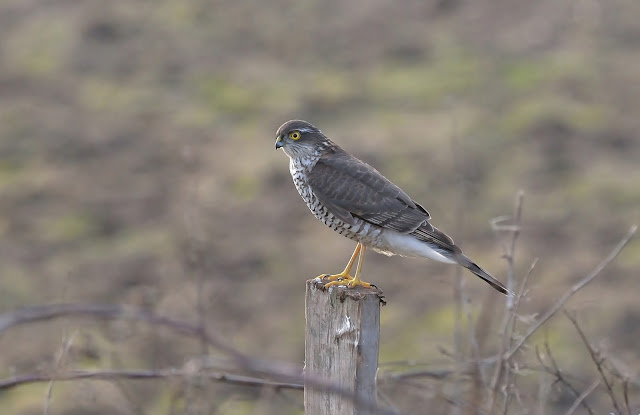 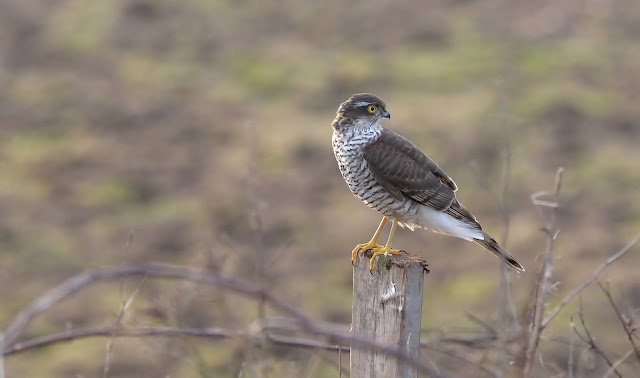 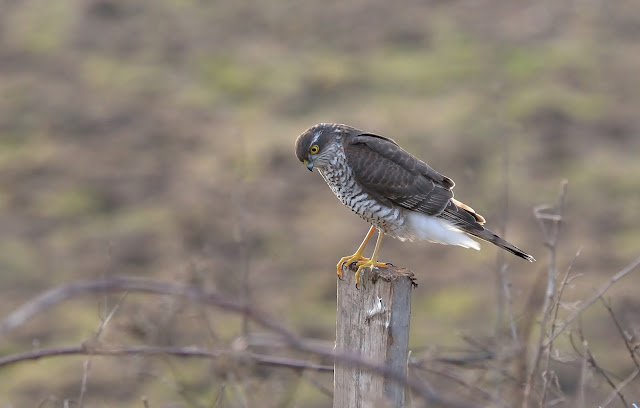 Sparrowhawk still looking down in the brambles.

About 20 minutes later I saw a large raptor flying some distance away, however it was heading my way. I could see it was more streamlined and longer tailed than a Buzzard and it was no surprise when it turned that the white band above the tail showed  proving it to be a 'ringtail' Hen Harrier. It didn't come close enough for any pictures but a great sight amongst the Sussex Downs.

Posted by Bob Eade. at 19:46
Email ThisBlogThis!Share to TwitterShare to FacebookShare to Pinterest